The United States Blues
Home News President of NRA tried to meet with Putin during 2015 trip to... 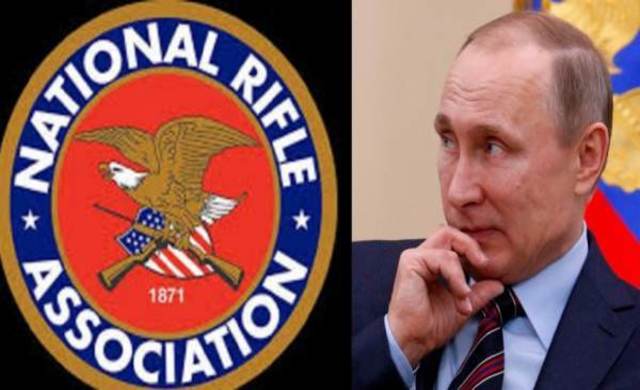 The former president of the National Rifle Association (NRA) tried to arrange a face-to-face meeting with Russian President Vladimir Putin while visiting Moscow in 2015. The purpose of the meeting, a GOP operative promised, might have “enormous diplomatic consequences.”

The Daily Beast reports that David Keene, the former president of the NRA, was sent an email with an offer that immediately caught his attention:

“An interview for his newspaper with Russian President Vladimir Putin. At the time, Keene was the opinion editor for The Washington Times, a conservative newspaper. He had previously helmed the NRA, and he maintained close ties with its top officials. And he was one of the small group of people on the trip.”

While in Moscow, representatives from the NRA met with a very high-powered group of Russian hosts, including Alexander Torshin, who at the time was a deputy governor at Russia’s powerful central bank.

GOP operative Paul Erickson, who was later identified as having a relationship with Russian agent Maria Butina, was also eager to make sure the NRA-Putin meeting took place, writing in an email he sent to NRA chief Keene:

“[I]mpressing the NRA’s Russian hosts is also the quickest way to secure a private interview with President Putin on behalf of David Keene and the Washington Times–a plum that was dangled in front of Keene by Torshin himself during a recent Torshin visit to Washington, DC.”

That email from Erickson also shows that Russia was eager to use the NRA to gain a foothold in the 2016 U.S. presidential race. And Erickson pitched the possible meeting with Trump in language that could not have been clearer:

“As we discussed over lunch in Iowa, Russia believes that high level contacts with the NRA might be the BEST means of neutral introduction to either the next American President OR to a meaningful re-set in relations with the Congress under a (God forbid) President Clinton. This simple good will trip would have enormous diplomatic consequences for a future U.S. / Russia bilateral relationship to the world.”

Clearly, the Kremlin was actively trying to influence the 2016 election as early as 2015 and saw the NRA as a vehicle via which they could get leverage with a group known to be close to the GOP.

The Moscow trip by members of the NRA has also drawn the attention of investigators looking into Russian interference on the 2016 race for the White House:

“Federal prosecutors in Washington, D.C. told Erickson’s attorney several months ago that they were considering charging him for illegally acting as a covert agent of a foreign government.”

Oregon Senator Ron Wyden, the top Democrat on the Senate Finance Committee, had this to say about the unfolding connections between the NRA and Russia:

“Americans would rightly be outraged if they learned that officers of a powerful, taxpayer-subsidized organization were offered personal incentives by the Kremlin in exchange for access to elite Republican circles. That question is right at the heart of my inquiry.”

All of this suggests that the NRA should be investigated, and, if found to have ties to Russia, prosecuted, punished, and disbanded for the national security of the United States.