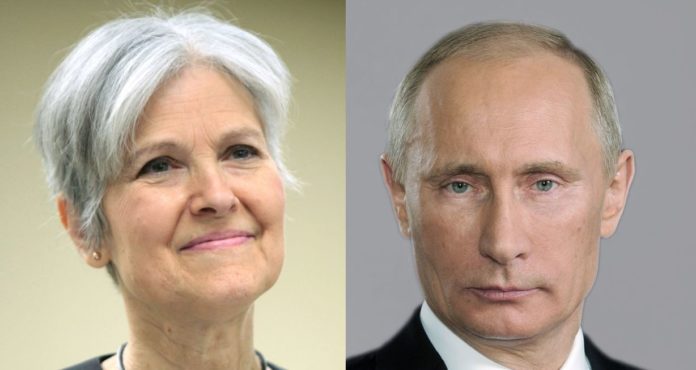 In the lead up to the final days of the 2016 campaign, social media activity on behalf of Green Party candidate Jill Stein spiked dramatically across several platforms, including Facebook, Instagram, and Twitter. And it now seems those pro-Stein messages originated in Russia as part of a coordinated campaign to assure that Donald Trump was elected president, NBC News reports:

“According to a report commissioned by the Senate … The report was one of two that leaked this week saying the Russian effort to disrupt the election specifically targeted black voters and harnessed America’s top social media platforms. But the reports contained another finding that was largely overlooked — the Russians also focused on boosting Stein’s candidacy through social media posts.”

The social media campaign for Stein was just one of several efforts undertaken by Russia to disrupt the U.S. election, according to cyber experts. For example, researchers also discovered that the online pro-Stein effort intensified in the last days of the presidential campaign and was directed at African-American voters:

“The posts were often accompanied by variations of the same hashtag, ‘Grow a spine and vote Jill Stein.'”

“The fact that the Russian propaganda apparatus helped create awareness and support for her candidacy and promoted her candidacy is critical to our understanding of Russian interference in the 2016 election.

“The Russians played this extremely adroitly.”

Looking at the archives of the Russian government-controlled new agencies RT and Sputnik also shows just how much Russia was invested in promoting messages favorable to the Green Party:

One of those overriding messages being pushed by Russian TV was the notion that Democratic nominee Hillary Clinton would start a nuclear war:

“In the closing weeks of the campaign, RT quoted Stein suggesting that Hillary Clinton could lead the U.S. into a nuclear war with Russia and saying Trump was a safer choice.

“‘On the issue of war and nuclear weapons,’ Stein said, according to RT, ‘it is actually Hillary’s policies which are much scarier than Donald Trump who does not want to go to war with Russia.'”

Clint Watts, a former FBI counter-terrorism expert, says none of the pro-Stein efforts by Russia should be a surprise:

“Is Stein a fellow traveler or a useful idiot? I don’t know, but even after the election she played into Russia disinformation by pursuing a recount so heavily and claiming election fraud. This was a post-election coup for Kremlin propagandists.”