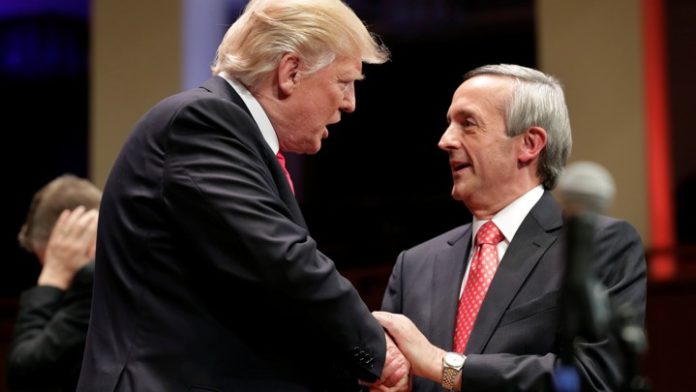 Robert Jeffress is the pastor of First Baptist Dallas and also serves as an “evangelical adviser” to the most immoral man to ever hold the office of president, Donald Trump, who is so deeply religious that he hasn’t been to church in decades and cannot quote a single verse from the Bible.

Jeffress has a message for this fellow Christians: If you don’t support President Trump, you’re a moron.

In an interview published this week, Jeffress declared:

“Let me say this as charitably as I can. These ‘Never Trump’ evangelicals are morons. They are absolutely spineless morons, and they cannot admit that they were wrong.”

As you might expect, Jeffress says the most important issue to him is abortion, and he won’t be happy until he’s able to make Margaret Atwood’s dystopian masterpiece, The Handmaid’s Tale, a reality in the United States.

“This is an issue of life and death. This is so black and white, so much about good versus evil. I don’t get it. It really goes to the core of who we are as a country and what kind of a country we have in the future, and if we can’t get this issue of life right, I just don’t know where we’re going to go down the road.”

The fake Christian minister also compared the movement for abortion rights to the rise of the Nazi government of Hitler’s Germany:

“We cannot afford to be like German Christians who, in the rise of the evil reign of Adolf Hitler, just remained neutered. They remained silent. And you saw what happened there. I think there’s a similar wave of godlessness that is rising in our country right now, and we must push back against that tide.”

Apparently, the irony of how easily Trump can be compared to fascist regimes of the past is lost on Jeffress, but Doug Pagitt, a progressive evangelical pastor from Minneapolis, says the goal of Jeffress and other far-right Christians isn’t to actually reduce the number of abortions in the U.S. Instead, Pagitt told HuffPost:

“[They’re] more concerned with criminalizing abortion than they are in reducing the number of abortions.

“The best way to limit the number of abortions is change the conditions that make keeping a pregnancy so difficult. There are also many people of Christian faith who argue that the ending of a pregnancy is not a moral wrong, and they support the right of a woman to have access to this procedure.”

In other words, this demented minister and his fellow Christian extremists are all about control. They want to impose their religious beliefs on others, even though that directly contradicts the Constitution.

But we don’t live in a theocracy. And if Robert Jeffress and his minions are so eager to be part of a nation where religious leaders make all the laws, they need to hop a flight to Iran instead of forcing their outdated beliefs on the majority in this country who don’t think the church or the state should ever play a part in any reproductive decision a woman makes.