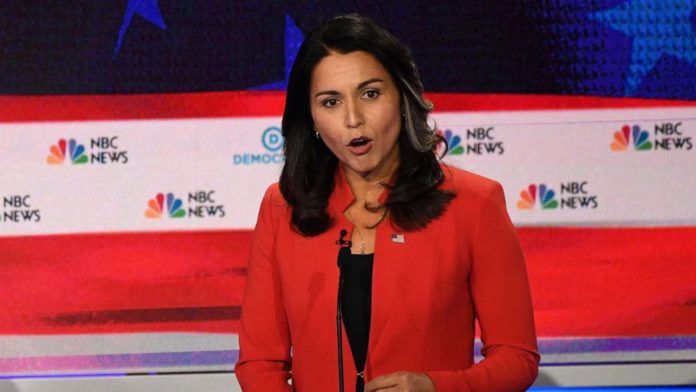 The attempt to manipulate the 2020 election via social media and the internet has already begun, and it appears the attacks are aimed squarely at the Democratic debates and candidates seeking the nomination of their party to face President Donald Trump.

NBC News reports that social media sites known to be used by those loyal to Trump began urging followers to vote in online polls for candidates with low poll ratings immediately after the first Democratic debate was held Wednesday evening:

Users from pro-Trump communities on 4chan and Reddit implored fellow members to vote for lower-polling candidates in online polls, specifically Tulsi Gabbard and Bill de Blasio, in the hours after Wednesday’s Democratic debate — a sign that digital manipulation efforts related to U.S. politics and elections remain very much alive.

Users on 4chan’s anonymous far-right /pol/message board repeatedly posted links to polls across the web, encouraging one another to “blow the polls out” for Gabbard, the congresswoman from Hawaii who has developed a substantial support base among many of its users.

One message posted on the 4chan right-wing message board referenced a poll being conducted by Drudge that showed Gabbard leading and urged:

“GIVE HER YOUR POWER.”

Their efforts appear to have been successful, as Gabbard was the runaway winner of the Drudge online poll:

The results from the poll on the Drudge Report, where Gabbard netted almost 40 percent of the vote, despite previously polling at less than 2 percent in national polls, created coverage in itself. The politics blog The Hill and The Daily Mail wrote about Gabbard’s performance in the poll, with The Daily Mail calling Gabbard the “shock winner” in the “first poll” after the debate. As more mainstream outlets pick up the methodologically questionable polls, the likelihood that they will be covered by more prominent news media and political figures increases.

But did Gabbard really emerge victorious? Many experts who watched the first Democratic debate declared the big winners to be Senator Elizabeth Warren (D-MA) and former HUD Secretary Julián Castro, both of whom turned in strong performances Wednesday.

Since Gabbard announced her intention to run on Jan. 11, there have been at least 20 Gabbard stories on three major Moscow-based English-language websites affiliated with or supportive of the Russian government: RT, the Russian-owned TV outlet; Sputnik News, a radio outlet; and Russia Insider, a blog that experts say closely follows the Kremlin line. The CIA has called RT and Sputnik part of “Russia’s state-run propaganda machine.”

Given what happened in 2016 with the dissemination of false information harmful to Democrats, we can expect more of the same as 2020 draws closer. Fortunately, this time we know to be ready for it.