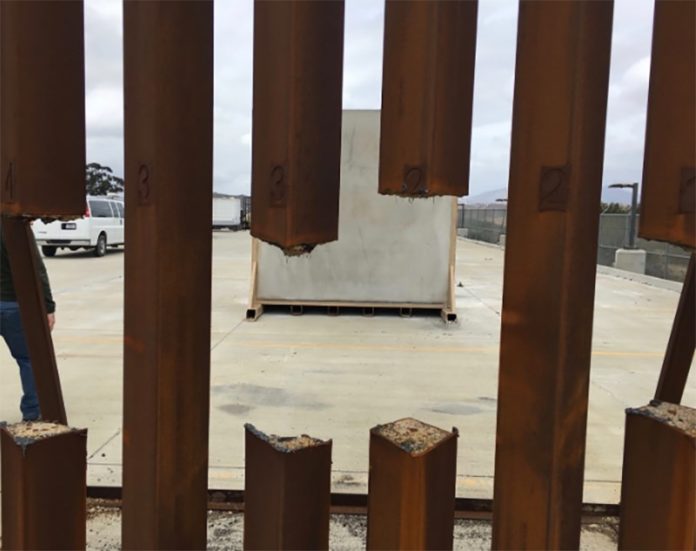 According to President Donald Trump, his long-promised border “wall” will actually be a series of metal slats that will be impenetrable. Just a few days ago, he remarked:

But the steel slat idea appears to have one major flaw: It can easily be cut with a saw, NBC News reports:

“A photo exclusively obtained by NBC News shows the results of the test after military and Border Patrol personnel were instructed to attempt to destroy the barriers with common tools.”

Asked about the obvious design flaw in the steel slats that will be used, DHS Spokeswoman Katie Waldman commented:

“The steel bollard design is internally reinforced with materials that require time and multiple industrial tools to breach, thereby providing U.S. Border Patrol agents additional response time to affect a successful law enforcement resolution. In the event that one of the steel bollards becomes damaged, it is quick and cost-effective to repair.”

Hmm…sounds like DHS is well aware of the fact that their steel bars are easy to saw through, but it’s not a big deal because they can repair them at a low cost. However, that would seem to be the equivalent of admitting that a home alarm system doesn’t always work, but at least it’s super easy to install.

“President Trump likes to pretend a wall will solve all our problems, but it’s been clear for some time that it is little more than a very expensive vanity project. Whether steel or concrete, there is nothing special about his wall and it will not secure our borders. Democrats are willing to work with the administration to improve our border security, but let’s get back to proven and effective solutions.”

Trump will travel to McAllen, Texas, Thursday for a photo-op, and has hinted he may declare the border a national emergency and divert funds from the U.S. military for the wall project. Such a declaration would likely be challenged in court, meaning the president’s promise of a border wall would remain unfulfilled.