The United States Blues
Home News Psychiatrist warns Trump may blow up the world to distract from Mueller... 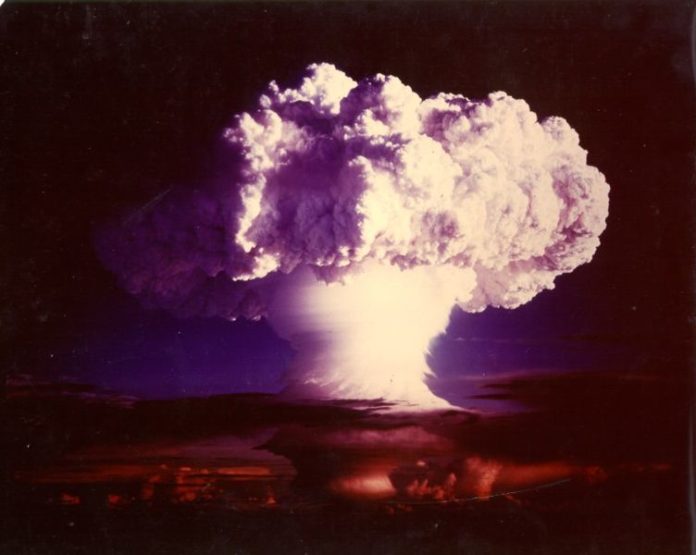 President Donald Trump is so desperate to bury Special Counsel Robert Mueller’s final report and stay in power that he may blow up the world to do it, says a psychological expert. And Trump could do it, too, since he has control of America’s nuclear arsenal and is obsessed with using it.

Trump has been musing about using nuclear weapons since 2016 when he refused to rule out using nukes against Europe.

He has also threatened North Korea and Iran with nuclear attacks.

North Korean Leader Kim Jong Un just stated that the “Nuclear Button is on his desk at all times.” Will someone from his depleted and food starved regime please inform him that I too have a Nuclear Button, but it is a much bigger & more powerful one than his, and my Button works!

To Iranian President Rouhani: NEVER, EVER THREATEN THE UNITED STATES AGAIN OR YOU WILL SUFFER CONSEQUENCES THE LIKES OF WHICH FEW THROUGHOUT HISTORY HAVE EVER SUFFERED BEFORE. WE ARE NO LONGER A COUNTRY THAT WILL STAND FOR YOUR DEMENTED WORDS OF VIOLENCE & DEATH. BE CAUTIOUS!

“I think, for me, nuclear is just the power, the devastation is very important to me,” Trump said during the 2016 campaign.

And now that devastation may be important to Trump for a whole new reason because it would serve as a massive distraction.

Yale psychiatrist Dr. Bandy Lee warned that Trump could destroy the world out of desperation to avoid answering for his crimes.

“He has very poor coping mechanisms when he is criticized or when he feels humiliated,” Lee told Politico. “And at these points he generally goes into attack mode and he threatens others or tries to get revenge. The Mueller report is of a scale that is probably unlike what we have seen him undergo before. Obliterate observing eyes of his humiliation. Destroying the world. That, very quickly, becomes an avenue, a perceived solution for individuals with his personality structure.”

After all, if the American people are too busy watching a mushroom cloud on television, they’ll be too distracted to focus on what Mueller says in the highly anticipated final Russia investigation report, which could very well incriminate Trump in crimes ranging from conspiracy against the United States to obstruction of justice to money laundering, all of which would be impeachable offenses he would likely face prosecution over.

And considering Trump shows multiple signs of psychiatric disorders and declining mental health, which George Conway has been pointing out over the last week, he could launch nuclear weapons in a last ditch effort which would also allow him to declare a national emergency. Such a manufactured emergency would also give Trump the power to kill the investigations against him, take control of the media and cancel the 2020 Election so he can remain in power, especially since Senate Republicans refuse to impeach.

Of course, this is the worst case scenario, but it’s a frightening scenario that becomes all the more possible when you consider that Trump has zero respect for the Constitution and rule of law. He is incapable of empathy and has zero compassion for others. He only cares about himself, and that makes the rest of the country and the world expendable if it means he benefits. We can only hope that the soldier tasked with launching the nuke refuses to obey the order. Because if the nukes start flying out, nukes will fall upon us as well. This is what happens when a madman is in power.