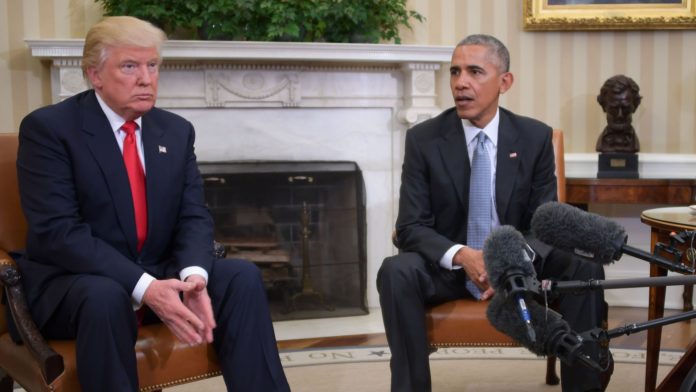 At the press conference for the end of this year’s G7 summit on Monday, President Donald Trump was asked about his suggestion that Russia be allowed to rejoin the group after being booted from the conclave for Vladimir Putin’s attack on Ukraine and annexation of Crimea. Rather than respond directly, Trump went off on an extended rant in which he suggested the Putin had “outsmarted” former President Barack Obama and that Russia had “taken” Crimea from the former president.

Looking back at that response, Pulitzer Prize-winning Washington Post columnist Eugene Robinson noted that Trump’s Obama envy is getting worse by the day, writing:

“Trump blasts the Obama administration’s record of creating jobs and claims to be doing much better. Yet, under Obama, the unemployment rate fell from a high of 10 percent to just 4.7 percent. Under Trump, it has dropped further to 3.7 percent. Which president had the bigger impact?

“Trump blames Obama for being soft on illegal immigration, yet he deports fewer undocumented migrants than Obama did. And when Obama left office, undocumented border crossings were at a multiyear low. The huge increase, driven in part by asylum seekers from Central America, has taken place under Trump.”

Not only that, Robinson notes, but Trump even insists that his own cruel immigration policies — separating children from their parents and holding them in cages — is all Obama’s fault. Which is ludicrous because if that was true, Trump is now the president and could end it all with one phone call or an executive order saying, in essence, This will not stand!

And there’s also the way Trump seems positively obsessed with trying to overturn everything Obama accomplished, such as the Affordable Care Act, Robinson adds:

“Trump has tried repeatedly to repeal the Affordable Care Act — apparently because it’s called Obamacare — even though he offers nothing to replace it and must be aware that the health-care issue helped Democrats regain control of the House in last year’s midterm elections.”

So what’s really going on here? It’s really quite simple: Trump is afraid that Obama will be seen as a much better president than him, especially if Trump happens to lose his bid for reelection next year, Robinson concludes:

“Obviously, I can’t know for sure what the root cause of Trump’s Obama obsession might be. Everyone should remember, though, that he was an active and vocal proponent of the racist “birther” conspiracy theory, at one point claiming, without evidence, that he had sent investigators to Hawaii to discover the ‘truth’ about Obama’s birth certificate.

“Trump seems terrified that history will look more kindly on Obama’s presidency than on his own. If that’s the case — on this one point — he couldn’t be more right.”

Prediction: Obama will be seen as a better president, a better person, and a better example of what real American exceptionalism looks like than Donald Trump. It won’t even be close.