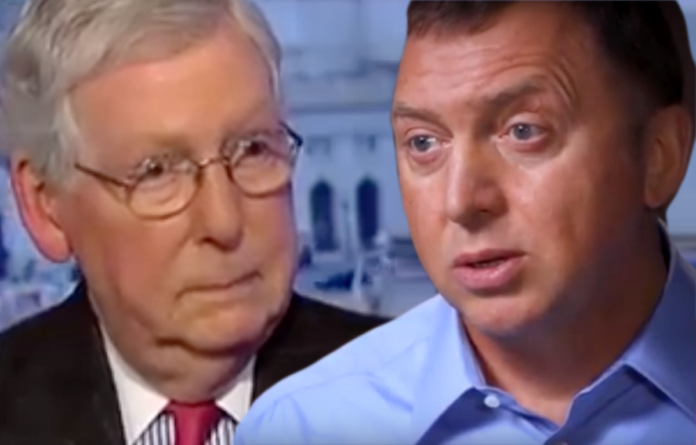 Attorney General William Barr’s color-coded and heavily-redacted “Mueller report” is coming out this week. Trump and his cronies jumped to exonerate him from all wrongdoing in late March, weeks before even a redacted report would reach Congress. They would have us all believe all those myriad Russia connections with the Trump campaign and the GOP are all perfectly ethical and innocent. All of this seems to signal it’s time to get back to business as usual between the oligarchs and the GOP, right?

The Senate Majority Leader, Mitch McConnell (R-KY) is certainly getting back to business. Where is the shame that an oligarch connected to Putin is going to invest $200 million in Senator McConnell’s state of Kentucky? The money would be used to build the largest new aluminum plant built in the U.S. in nearly four decades. Meanwhile, the same oligarch is suing the Treasury Department to get sanctions lifted on him personally.

If that doesn’t scream, “you scratch my back and I’ll scratch yours” or Quid pro quo, then what does?

The company is Oleg Deripaska’s Rusal, a name that should quite familiar by now. That’s because it’s the same company that the U.S. Treasury inexplicably decided to lift sanctions on after Trump was pressured to enforce sanctions on Rusal as part of a Russian sanctions bill in 2017.

Deripaska, a Russian billionaire connected to Putin, launched a lawsuit in March against the U.S. Treasury Department to get sanctions placed on him last year removed. The Trump administration lifted the sanctions on Rusal and En+ in January but not on Deripaska. The metals tycoon says he “a victim of this country’s political infighting” and that his net worth valued at $3.6 billion has been devastated. So now he’s going to invest in Kentucky?

When McConnell and the Republican Senate voted to lift sanctions on Rusal, they helped out one of their top million-dollar donors, another oligarch who is business partners with Deripaska in Rusal, Leonard “Len” Blavatnik.

Investigative Journalist, Julia Davis explains what the Ashland, Kentucky deal between Braidy Industries Inc. and Rusal would look like:

“The 10-year agreement would make Braidy Rusal’s biggest customer and give Rusal a significant presence in the U.S. rolled-aluminum market, where it has no mills of its own.”

If the plant is built, then aluminum from across the globe would flow into Kentucky for use in who knows what. So far it looks like they are touting the use for the auto industry, which is “replacing steel with aluminum because it is lighter.”

“…the mill would roll aluminum slabs from abroad into thin sheets for the auto industry.”

Just imagine Trump at a rally, patting himself on the back for bringing jobs to Kentucky while selling Russian aluminum from a plant built on money from Putin’s buddy Deripaska. Trump’s trade wars seem to have nicely helped this become the new reality in America.

Kentucky, are you proud of this?

The Russians and Putin must be delighted. Let the aluminum flow from Siberia straight to Mitch McConnell’s home state.

“Braidy said Rusal would supply the new mill with as much as 200,000 metric tons of foreign-made aluminum each year, most of it from an aluminum smelter under construction in Siberia,” wrote Davis.

Is it any wonder that McConnell and his colleagues who have taken money from Putin-connected oligarchs have blocked attempts to make the Mueller report public? Now it looks like a heavily-redacted version by Barr will come out this week, but judging by past events, Congress may have to let subpoenas start flying before they get the full picture.

Now, just to illustrate how contradictory and hypocritical this all is, here it McConnell acknowledging “Russia is not our friend.”

Watch Oleg Deripaska try to downplay his interest in the American political system and his dealings with Paul Manafort below: