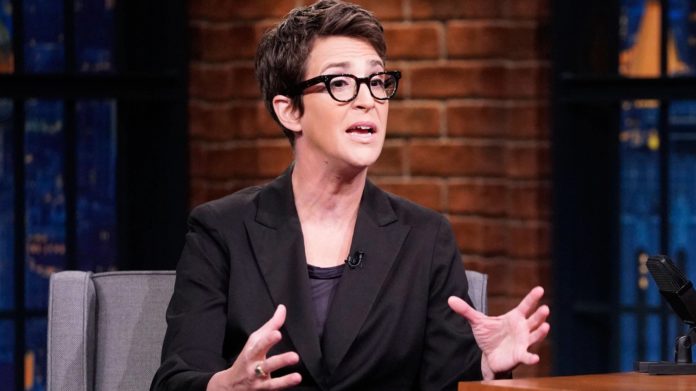 MSNBC host Rachel Maddow says congressional Democrats need to stop worrying about the political consequences of impeaching President Donald Trump and do what’s best for the country and Constitution.

Appearing on “Late Night With Seth Meyers” Tuesday evening, Maddow said Democrats have a duty to at least open an impeachment inquiry and see where it leads:

“If a president commits high crimes and misdemeanors, the way the Congress is supposed to hold him accountable is by opening an impeachment inquiry, doing an investigation and then voting on whether or not they think that it rises to that level.”

So far, however, Speaker of House Nancy Pelosi (D-CA) has resisted calls for such a move, saying she would rather have voters get rid of Trump at the ballot box in the 2020 election.

Maddow then laid out exactly what’s at stake when it comes to the crimes Trump has allegedly committed:

“Whether or not that hurts the president, helps the president, hurts the Democrats, helps the Democrats, A, is unknowable and, B, should be beside the point, and if you are doing it for the right reasons I think you are more likely to persuade the country that you’ve done it for the right reasons, rather than you having tried to think everybody around the corner in terms of how this is supposed to work out.”

Democrats, Maddow concluded, need to launch an impeachment inquiry “in terms of the constitutional imperative.” And she added:

“Who cares who it’s good for?”

Special counsel Robert Mueller laid out at least ten instances where President Trump may have committed obstruction of justice, the very same charge that was listed on the articles of impeachment drawn up against both Richard Nixon and Bill Clinton. If the head of state is allowed to claim he’s not accountable to the laws that govern all of us, that sets a dangerous precedent that only leads in one direction: To authoritarianism. If the law doesn’t apply to everyone, then it doesn’t apply to anyone.