The United States Blues
Home National News Rachel Maddow On Why The GOP Turned A Susan Rice Email Into... 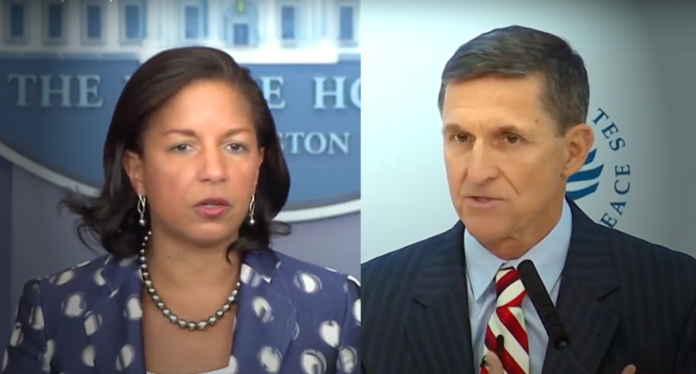 As part of what looks to be continuing efforts to undermine the Russia investigation, Judiciary Committee chairman, Chuck Grassley (R-Iowa.), and Senator Lindsey Graham (R-S.C.) sent emails to former National Security Adviser, Susan Rice. They asked about an “unusual email” she sent to herself on President Donald Trump’s Inauguration Day, to be recorded on file by her assistant.

The new email was declassified at the National Security Council to be shared publicly, revealing what happened at a harrowing and critical moment in American history.

The email noted that she wanted to document a meeting with former President Barack Obama, former FBI Director James Comey, former Vice President Joe Biden, and former interim Deputy Attorney General Sally Yates that took place just two weeks before the Trump administration would begin the transition to power. This transition took place amid the FBI’s investigation into possible ties between Russia and the Trump campaign.

“On January 5, following a briefing by IC leadership on Russian hacking during the 2016 Presidential election, President Obama had a brief follow-on conversation with FBI Director Jim Comey and Deputy Attorney General Sally Yates in the Oval Office. Vice President Biden and I were also present.”

That meeting reportedly included a discussion of the Steele dossier and the FBI’s investigation of its claims.

President Obama began the conversation by stressing his continued commitment to ensuring that every aspect of this issue is handled by the Intelligence and law enforcement communities ‘by the book.’

The President stressed that he is not asking about, initiating, or instructing anything from a law enforcement perspective. He reiterated that our law enforcement team needs to proceed as it normally would by the book.

From a national security perspective, however, President Obama said he wants to be sure that, as we engage with the incoming team, we are mindful to ascertain if there is any reason that we cannot share information fully as it relates to Russia.”

Even though the letter clearly states Obama wanted everything done “by the book,” Graham and Grassley believed the letter was “odd and disturbing,” and asked her a list of questions concerning the FBI investigation, expressing concern about the FISA application used to wiretap Trump’s adviser, Carter Page.

This echoes the approach of the Nunes Memo, which was released by Trump, probably as a means to paint the FBI as politically biased against him. Instead, it backfired, confirming the legitimacy of the FBI investigation.

On the Rachel Maddow Show, the journalist elaborates on the full context of the situation for Susan Rice. If you imagine yourself in her unique and unprecedented situation, what’s in the emails it doesn’t seem odd at all. But are the Senators capable of seeing it from that objective perspective, or are they choosing not to for political reasons?

“Imagine you are national security advisor to the president of the United States.”

The position would be stressful, with the responsibility of informing the president on multiple national security matters multiple times a day. Then consider the unique set of circumstances of the 2016 election, and how to transition to an administration that has been implicated in possible involvement with the Russians to take the White House.

How do you responsibly protect American security concerns while handing the baton to Trump’s administration, knowing that Russia appears to have helped them in deliberate attacks on our elections?

“Image you’re the Nationals Security Advisor while all this is happening. You know all this is happening. You have access to all of this intel. The election ends. The side that Russia was trying to help, in fact, won the election. How do you, as National Security Advisor responsibly prepare to help that campaign transition itself from a presidential campaign to the next presidential administration?”

How do you responsibly hand over intelligence on the matter of the Russian interference to the people who benefitted from that interference? It’s a mind-boggling situation to put yourself in. But unless you imagine that then you might arrive at the conclusions that Senators Graham and Grassley have, seeing it odd that Rice would need to document being:

“…Mindful to ascertain if there is any reason that we cannot share information fully as it relates to Russia.”

It’s another nothingburger, like the Nunes memo. The two Senators know very well what a precarious and delicate situation Rice and the Obama administration found itself in, yet try to frame it as “disturbing” that Rice made a point to document the meeting with Obama? Come on now…

Rice and Obama knew that the incoming National Security advisor, Michael Flynn was secretly communicating with Russians to undermine the intent of Obama’s sanctions against Russia for interfering in the election.

Michael Flynn, a man that Obama fired and warned Trump about, and yet he was hired anyway? How do you conduct a seamless transition under those extraordinary circumstances?

Given the circumstances, it sure looks like Obama and Rice handled it with nothing less than complete professionalism.

“Given what Susan Rice knew about Michael Flynn during the transition, what’s she supposed to do?”

Watch the Rachel Maddow Show below: