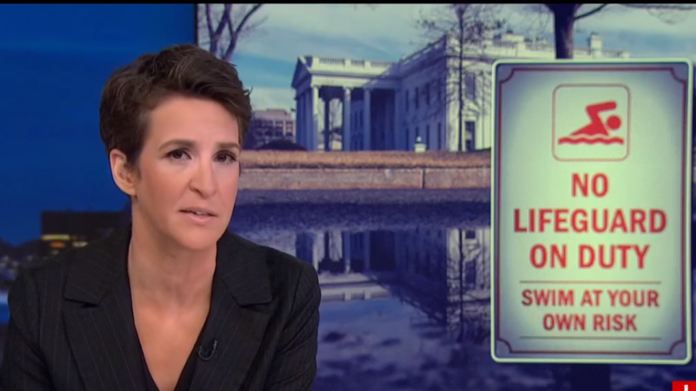 With scandals swirling around him on every side — the ongoing Russia probe and multiple women alleging extramarital affairs — President Trump is probably feeling like the walls are closing in on him.

But since firing Special Counsel Robert Mueller would likely bring about impeachment hearings and his sexual indiscretions are well-known facts, Trump may just be hoping to change the topic, and he could have a way to do exactly that.

On her show Friday evening, MSNBC host Rachel Maddow speculated that shortly before former adult film star Stormy Daniels is scheduled to appear on 60 Minutes Sunday evening, the president may try a new tactic in order to shift the narrative:

“Even among White House sources, there’s now open speculation that the firing H.R. McMaster and hiring of John Bolton was timed by the president to distract from one particular interview [with accuser Karen McDougal] that aired last night on CNN.

“If the speculation is true, that the national security adviser to the President of the United States was fired to distract from the Karen McDougal interview, heaven help us. For whatever is this president and this White House are going to do to distract us this weekend? Because the Stormy Daniels is due to air Sunday night on 60 Minutes.”

Maddow’s conclusion: Trump will start issuing pardons so the media will be forced to report on that instead of what Daniels has to say:

“I do really love tacos. I have a square — Mike Flynn pardon and my timing early Sunday afternoon.”

It’s difficult to disagree with Maddow’s friendly wager. Trump is a shallow, thin-skinned man who thinks he should be able to dictate what is covered in the daily news cycle. And he’s also known to act in ways that put him in even greater legal jeopardy.

And what’s not to love about a good taco?