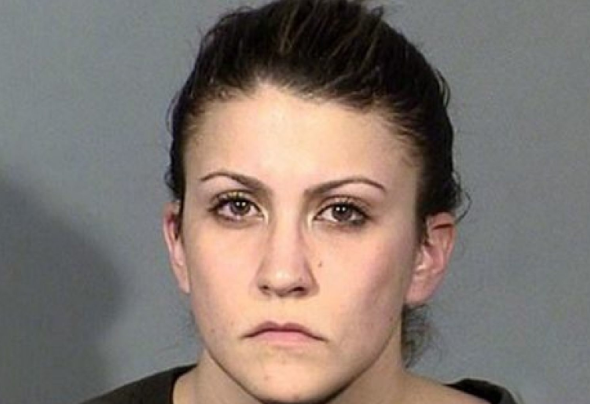 A female Las Vegas police officer has been charged with multiple crimes following an investigation that revealed she forced men and women she swore to protect and serve to follow humiliating demands for her own entertainment, which she recorded and shared with others.

According to the Las Vegas Sun, police officer Rachel Sorkow “made a mentally ill man dance for her, taunted a handcuffed man as an officer force-fed him gummy bears, and used a racial epithet in conversation with an indecent exposure suspect, who she asked to see his genitalia.”

“I just want to see you dougie (sic) and twerk and then we’re good,” she told the mentally ill man.

She suggested a plus-size woman appear on “My 600-Pound Life” and asked if she breastfeeds during a domestic violence call. Seriously.

Sorkow also abused her power by performing background checks on dates for herself, her friends and family, and shared addresses, license plate numbers and images that she was not supposed to share.

Text conversations and records show that Sorkow searched for information on behalf of her associates that included background information on dating prospects, addresses and a non-redacted report on a child abuse investigation that named the children, police said.

Sorkow, 29, was arrested Tuesday on five felony counts of misconduct by a public officer, and one gross misdemeanor each of capturing the image of the private area of another person and indecent exposure, Metro said. She was relieved with pay in December and dismissed this week.

Many police officers across the country have complained about citizens filming their conduct in recent years, but here’s a cop who filmed her own misconduct for her own amusement. This is why police officers should be filmed. Because if these videos were never produced, Sorkow may not have been caught because her own partner kept quiet.

This officer called a black man the N-word, insulted a woman because of her weight, and forced a mentally ill man to dance like her own personal slave, all so that she could be entertained on the job and have something to show her friends. This is not the kind of person who should be allowed on the police force. Sadly, there are many like her who have not or have never been caught and it’s a tragedy that her behavior and misconduct went on for at least a year until she was fired and arrested.