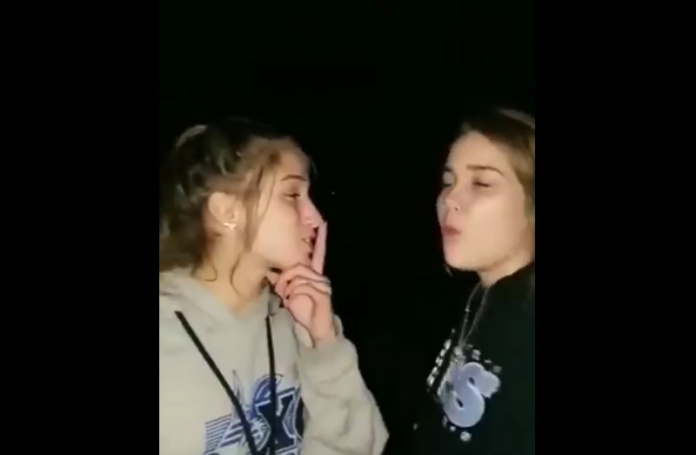 In yet another lesson in watching what you say on video, an Illinois woman who called for bringing back slavery three years ago has been fired after the video of her saying it recently went viral on social media.

A Facebook user posted the video to her page to call out the women, identified as Macy Castleman and Jayde Landers, for spewing racist hate.

“We hate n***ers, because they smell and they don’t work, so we should bring back slavery to whip them n*ggers,” Castleman says on tape. “Bring back the KKK. Woooo!”

Slavery has been outlawed in this country since the Civil War and black people suffered brutal and unforgivable torture at the hands of slave owners. So, this is not something to be joking about or calling for a return to.

The Facebook user, Gabbi Goldsborough, was not amused and used the video as an example proving that racism is alive and well all while pointing out that her and her friends all have jobs.

“I love how people sit around & act like racism isn’t still a thing,” she wrote. “Macy Castleman u have a lot of explaining to do. ps: all of my black friends and I have jobs.”

Castleman attempted to defend herself, but didn’t do a very convincing job.

“I have black people in my family,” she said. “Clearly don’t feel that way, so you can chill. Also it was an inside joke with my best friend. But feel however you want to feel about it.”

This is a common defense by racists by which they claim to have black friends, therefore, they can’t possibly be racist. And it’s complete bullsh*t.

In fact, Castleman’s behavior and poor defense of it resulted in her getting fired from her job at Concordia Village, a senior assisted-living facility in Springfield, Illinois. The facility even announced the action they took and condemned the video.

“A disturbing video posted on a personal social media account by a former employee over the weekend has come to our attention,” Concordia Village said. “We are disappointed by the personal views expressed by this former employee and regret the adverse attention it has brought upon our community. We have addressed the situation with the employee according to our personnel policies and that individual is no longer employed by Concordia Village or Lutheran Senior Services.”

Racism has been on the rise since Donald Trump became president. This video was apparently filmed in 2017 after his inauguration. And racism has only gotten worse as he launches attacks against Democratic lawmakers of color and incites violence against Latinos.

Castleman is now learning the hard way that being openly racist is not good for any business, which is why such behavior often goes against company policies. In the end, businesses can go a long way toward ending racism in America by making it clear that it will not be tolerated and will result in automatic termination. Surely, there’s a non-racist who is looking for a job that Concordia Village can now hire. And Castleman’s behavior will now follow her around for the rest of her life.