The United States Blues
Home Politics Congress Racists Lose Their Tiny Minds After Democratic Congresswoman Is Sworn In On... 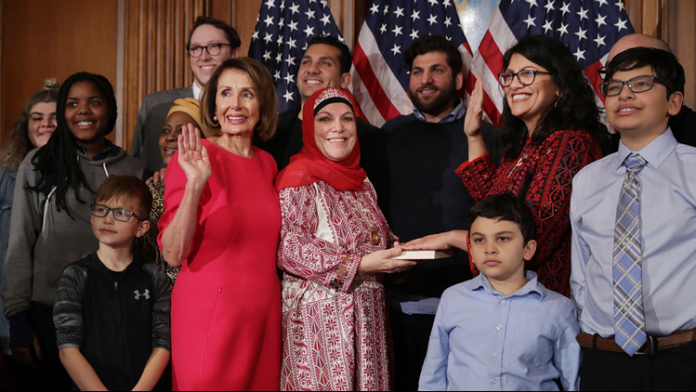 Thursday was a historic day in the U.S. House of Representatives. For the first time in American history, two Muslim women–Reps. Ilhan Omar (D-MN) and Rashida Tlaib (D-MI) were sworn in as members of Congress.

Rep. Tlaib was sworn in on a Koran with an incredible historic pedigree: It belonged to Founding Father and third President of the United States, Thomas Jefferson.

But, as you might expect, not everyone was proud to see such incredible diversity come to the House, and they lashed out on social media, proving their own ignorance and intolerance with their comments. Take a look:

Another aspect that concerns me is at noon today they both receive a security clearance given to congress members. Because it is a voters decision when elected that they deserve it. Also changing the rules 4 people who will not stand for constitution.🤔 https://t.co/3GJGZelVc0

Omg who ever voted for these people are not true Americans, when you know what they stand for & vote for them anyway & the rest of America has to pay UGH!!!!

Oh yeah. You know I’m pissed. I sent three tours in Iraq fighting Islam. I sent 1 tour in Somalia fighting gangs of Islam. Now they are elected into the very offices who sent us to fight.

There should be a law that you swear on a Christian Bible or not serve at all. You live in America, and our Constitution rules our Republic. Giving security clearances to non believers of our Republic lowers our Security from hostile nations!!

They should lose their jobs for being sworn in with a Koran. Minnesotas Islamists are doing the same today. Makes my blood boil. 😡

Our nation is doomed to become a liberal cesspool. Muslimes are soon to take over. White voters are generally stupid morons.

Fortunately, there were plenty of others to remind the brainless haters that we run this country by the Constitution, not the Bible, and there’s a little thing known as Article 6, Section 3 in that great document:

“our Constitution rules our Republic”

Yes, it does. Read it some time.

“…no religious Test shall ever be required as a Qualification to any Office or public Trust under the United States.”

The demonstration of your embarrassing lack of knowledge of the US Constitution makes your conservatears all the more thirst-quenching and delicious. 🥤😊 #FirstAmendMent #ArticleSix pic.twitter.com/j3xIE2lH6S

Where in the Constitution does it say we have to use a Christian Bible to swear members of Congress in?

Sounds to me as if you just made a case for oaths of office being taken on a copy of the Constitution. It is, after all, the Constitution rather than the Bible incoming congressperson take an oath to support and defend.

“I am for freedom of religion, and against all maneuvers to bring about a legal ascendency of one sect over another.” –Thomas Jefferson to Elbridge Gerry, 1799. ME 10:78

Please read the Constitution…all of it…before embarrassing oneself.