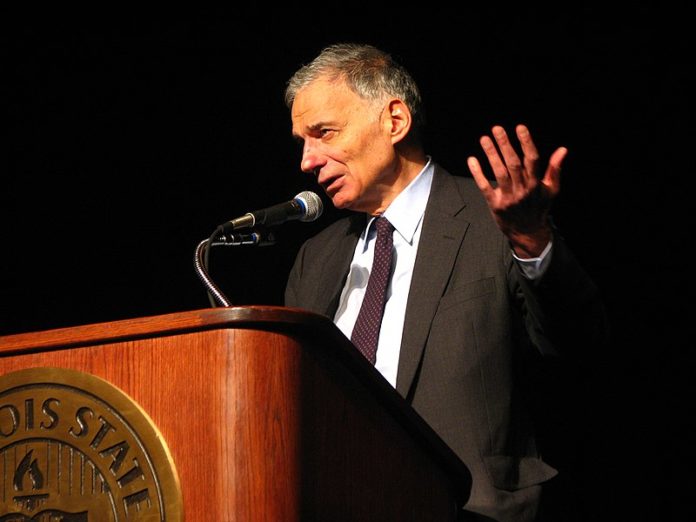 The Mueller report supposedly clears Trump of conspiracy, but does not exonerate him for obstruction of justice.

After two years of investigation, Mueller’s report is the most anti-climactic document to come out of a special counsel’s office.

In an op-ed for Common Dreams, Nader argued that the probe was a “farce” from the start because of how narrow the scope of the investigation was and because Mueller failed to subpoena and interview Trump under oath.

“What a farce and distraction this whole exercise turned out to be!” Nader declared. “Mueller’s assigned subject was Trump. So, does this prosecutor demand to interview Trump, to subpoena Trump? No. Does this special investigator conclude with any legal recommendations at all? No. He just wants to be forgotten as he slinks away into deliberate silence (unless he is made to testify before the House Judiciary Committee).”

“Trump couldn’t have distracted the mass dittohead media any better from his true crimes,” he continued. “Those include unlawful war-making, corruption, wasting public funds, and unlawfully handcuffing or firing the federal “cops” whose job is to save the lives, health, safety, and economic assets of all the American people from big corporate predators across the land.”

Nader went to list Trump’s various policies that have harmed the country, including his environmental policies that favor the fossil fuel industry and make climate change worse, his tax cuts for the wealthy that have caused a massive deficit, his war on economic regulations that prevent recessions, and his war on workers and healthcare. Nader also called attention to Trump’s lying and bigotry.

Despite Trump’s behavior and destructive policies, Republicans refuse to impeach him, which is why Nader is calling on the American people to protest.

“Never mind impeachment, millions of Trump’s victims, regardless of how they voted in 2016, should demand his resignation,” he wrote. “A million-people march should surround the White House and peacefully make this demand repeatedly.”

Nader then concluded by describing what Trump has done to our country’s values and warned that we need to stop him before it’s too late.

Enough of lying Trump’s slimy bigotry and his snarling, hateful, bullying speech always directed at the powerless. Enough of his destructive impact on millions of children imitating his coarseness toward siblings and parents who, when admonished, blurt out that the President says this and does that. That daily acidic intrusion into family life—a cultural time bomb—has yet to properly interest the media.

Cheating Donald J. Trump has gotten away with everything in his failed businesses and his Electoral College-caused Presidency. In so doing, he has taught us much about ourselves, how much we tolerate with chronic indifference to the flaying of the rule of law, and the principles of decency, helpfulness, peace, and justice.

He has taught us about the costs of not doing our political homework, of staying home civically and electorally. He has taught us that if we do not look ourselves into the mirror, the three horsemen of fascism, lawless plutocracy, and oligarchy will run our beloved country into the ground, if not over the fiscal cliff.

Republicans won’t act and Trump is much too dangerous to be allowed to stay in power. Therefore, the American people need to rise up and demand he step aside. Because if Trump somehow steals a win in 2020 or declares a national emergency to stay in power if he loses, we stand to lose our country and democracy forever.