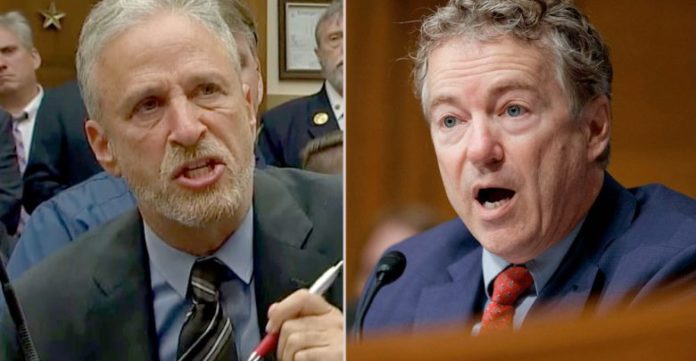 Less than 24 hours after former “Daily Show” host Jon Stewart slammed Senator Rand Paul (R-KY) for blocking a reauthorization of the 9/11 victims’ compensation fund, Paul showed up on Fox News to whine that Stewart didn’t understand how politics or economics works, and even calling Stewart names.

Appearing on Neil Cavuto’s show, Paul began by claiming that Stewart wasn’t informed on the matter:

According to Paul, he voted against the compensation fund bill because he insists on “pay-fors” with all spending bills and that Stewart’s criticism proves the comedian is “part of the left-wing mob that is not using his brain.” And then he added:

“It’s really disgusting. He pretended for years when he was on his comedy show to be somebody that could see both sides and see through the B.S., now he is the B.S. The B.S. meter is through the roof when you see him calling people names and calling people an abomination when I’m asking for something reasonable.”

As Stewart rightly pointed out when he called Paul out for being a hypocrite, the Kentucky Senator gladly voted for the massive tax cut for the rich, and that wasn’t paid for either. Cavuto raised the issue of Paul voting for the tax scam law. In response, Paul tried to suggest he wanted a “paygo” provision in that legislation, but it got taken out later in the process. But the bottom line is, Senator Paul voted for the tax cut even though he knew it would balloon the deficit. So much for being a fiscal conservative.

Paul even suggested that he should be praised for his principled stance on holding the line on federal spending:

“I’m trying to have a debate in our country about whether or not deficits matter and whether or not we should offset new spending. I think I should be commended and loudly cheered for being one of the few fiscally responsible people up here.”

Fiscally responsible? That would be laughable if it wasn’t so damn pathetic.

But it was what Paul said near the end of the interview that proves what a petty little man he is. He told Cavuto:

“Jon Stewart can’t just have a free pass to lie to people,” Paul said. “Think he’s a celebrity and think facts don’t matter … Here’s Jon Stewart making up his own facts so he can feel good about himself, and we shouldn’t let it stand.

“People need to wake up and not be so, sort of overwhelmed by celebrity that they take out-and-out falsehoods and ad hominem attacks from — really a guttersnipe like Jon Stewart.”

Jon Stewart is a guttersnipe because he’s insisting that the government take care of brave first responders who rushed into danger in order to save lives on September 11? Sounds like Senator Paul is little more than a privileged, out of touch clown who can’t take valid criticism.