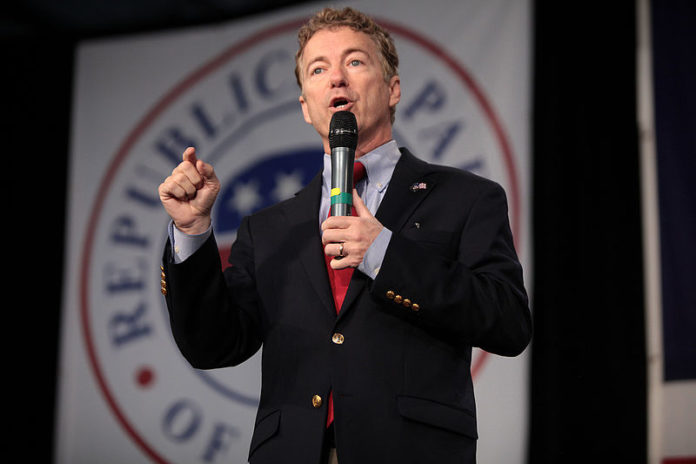 A resolution denouncing President Donald Trump’s national emergency now has enough votes to pass in the Senate after Senator Rand Paul (R-Ky.) announced his intention to vote for it.

During a speech in front of 200 Republicans in Western Kentucky University’s Augenstein Alumni Center this week, Paul criticized Trump for usurping Congress’ power of the purse in an effort to build a border wall the legislature chose not to fund and declared his support of a resolution passed by the House in opposition to the national emergency declaration.

Indeed, it sets a precedent that future Democratic presidents would use to deal with our nation’s healthcare crisis, gun violence and climate change. House Speaker Nancy Pelosi (D-Calif.) herself warned Republicans that this scenario will occur.

Paul’s vote means the Senate has a majority to pass the resolution, as he joins Sens Lisa Murkowski (R-Alaska), Susan Collins (R-Maine) and Thom Tillis (R-N.C.) in support of it.

“I have grave concerns when our institution looks the other way at the expense of weakening Congress’s power,” he wrote. “It is my responsibility to be a steward of the Article I branch, to preserve the separation of powers and to curb the kind of executive overreach that Congress has allowed to fester for the better part of the past century.”

“Conservatives rightfully cried foul when President Barack Obama used executive action to completely bypass Congress,” he continued. “Some prominent Republicans went so far as to proclaim that Obama was acting more like an ’emperor’ or ‘king’ than a president. There is no intellectual honesty in now turning around and arguing that there’s an imaginary asterisk attached to executive overreach — that it’s acceptable for my party but not thy party.”

Paul’s vote now sets up passage of the resolution and a future showdown between Trump and Congress. Trump has already threatened to veto it, which means Republicans will be pressured to override it or show themselves to truly be his loyal stooges who care nothing about the Constitution. At that point, the die will have been cast, and Democrats will long for the day when they can declare national emergencies to deal with real crises our nation faces without giving a single f*ck when Republicans whine about it.