The United States Blues
Home Politics Congress Rand Paul, Liz Cheney trade barbs to see who can be the... 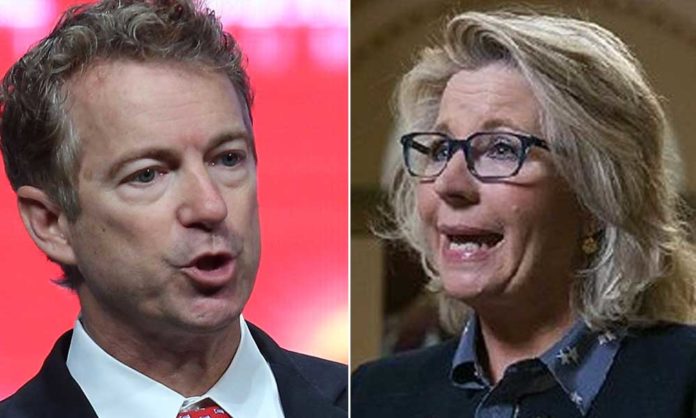 Rep. Liz Cheney (R-WY) and Senator Rand Paul (R-KY) are involved in a Twitter feud that’s getting nastier with each posting on social media. Their goal? To prove which one is the biggest sycophantic suck up to President Donald Trump.

On Thursday, Cheney dug deep into one of Trump’s old tweets when Paul was seeking the GOP presidential nomination in 2016 and had a bad debate performance:

Hi @RandPaul I know the 2016 race was painful for you since you were such a big loser (then & now) with a dismal 4.5% in Iowa. No surprise since your motto seems to be “Terrorists First, America Second.”

Here’s a TBT courtesy of @realDonaldTrump. No truer words were ever spoken https://t.co/7MIM31ZuKl

That sharp-elbowed posting was apparently in response to one Paul had made earlier in the day in which he accused Cheney of being engaged in “NeverTrump warmongering” for laudatory comments she had made about just-ousted National Security Adviser John Bolton:

Hi @Liz_Cheney, President @realDonaldTrump hears all your NeverTrump warmongering. We all see your pro-Bolton blather. I’m just grateful for a president who, unlike you, supports stopping these endless wars.

And then Paul doubled down on his tweet during an appearance on CNN, commenting:

“They want to stay in Afghanistan forever, they’re apologizing for John Bolton, they love John Bolton. Really they’re part of this foreign policy swamp that has been trying to undermine President Trump.”

All of this rancor appears to have begun on Wednesday, the 18th anniversary of the terror attacks on the U.S. Paul tweeted out that “endless wars” like Afghanistan needed to end:

I agree! Why do some neocons continue to advocate for endless wars? I stand with @realdonaldtrump on ending wars. Let’s focus on America First, not Afghanistan!https://t.co/fyBUbb8Fgf

Cheney took offense, suggesting that the Kentucky Senator had “forgotten” about 9/11:

I stand with @realDonaldTrump and our men and women in uniform who will never surrender to terrorists, unlike @RandPaul, who seems to have forgotten that today is 9/11. https://t.co/P0Ok2w48d5

At one point, even Rand Paul’s chief strategist Doug Stafford joined the bickering, claiming that President Trump “loves” the senator:

Actually, @realDonaldTrump loves @RandPaul and I’m pretty sure they both think your family is a bunch of chickenhawk warmongers who personally benefited from the military industrial complex and are responsible for thousands of lost lives and trillions of lost dollars. ??‍♂️ https://t.co/e0cwHzZ1i6

So far, Trump hasn’t said anything in response to the internecine Twitter warfare between Paul and Cheney, and considering his own attacks on anyone who disagrees with him in the least, he probably shouldn’t.