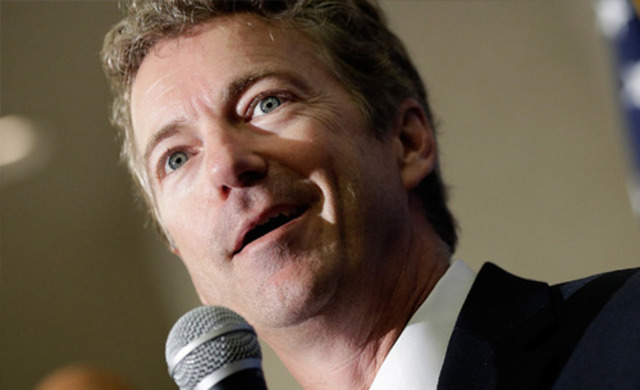 A week ago, Kentucky Senator Rand Paul (R) was on Fox News whining that former “Daily Show” host Jon Stewart wanted him to vote for a bill to fund the 9/11 victims’ compensation fund even though it would add to the national debt. Paul even went the childish route and referred to Stewart as a “guttersnipe.”

Now, however, Paul is introducing legislation that would give a permanent tax break to the Kentucky bourbon industry. As McClatchy reports:

The Kentucky Republicans’ legislation, offered Wednesday, would make permanent an about-to-expire provision in the tax code that allows for the deduction of interest expenses related to bourbon inventory in the year the expenses are paid.

Oh, and then there’s this little tidbit which makes Senator Paul’s hypocrisy even more galling: The reason the bourbon industry needs a tax break might have something to do with President Donald Trump’s ongoing trade war, which has been devastating for lots of businesses in the U.S.

According to the Lexington Herald-Leader, whiskey exports from the United States fell by 11 percent in the second half of last year, leading Chris Swonger, president and CEO of the Distilled Spirits Council, to lament:

“The damage to American whiskey exports is now accelerating,” Chris Swonger, president and CEO of the Distilled Spirits Council. This is collateral damage from ongoing global trade disputes.”

Apparently, the Senator from Kentucky doesn’t mind bailing out the bourbon business that’s suffering as a result of Trump’s tariffs, but he can’t seem to find a single dollar for heroes who charge into fiery buildings to save lives.

Dear Senator Paul: You’re as disgusting as they come.