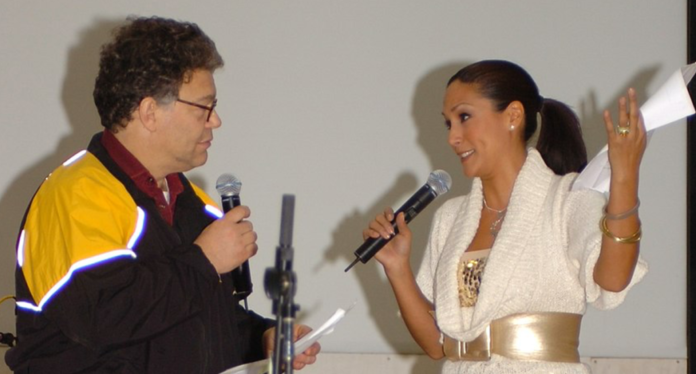 The women of Saturday Night Live released a statement of solidarity with Senator Al Franken following news of sexual misconduct allegations from Leeann Tweeden, a radio broadcaster. The issue has divided liberals and Americans in general. While some see the case as a political attack, others think any talk that Tweeden wasn’t exactly unbiased hurts the cause for women who face attacks on their credibility whenever they come forward for sexual assault.

The statement was posted by NBC on Twitter and the comments that follow illustrate just how sensitive and polarizing the subject can be. The issue of sexual misconduct shouldn’t be a politically weaponized issue, but factually it is a subject ripe for political exploitation when directed against political figures. What matters in every case is the individual case’s full context and the facts.

Here’s the statement from SNL Women:

“We feel compelled to stand up for Al Franken, whom we have all had the pleasure of working with over the years on Saturday Night Live (SNL).

What Al did was stupid and foolish, and we think it was appropriate for him to apologize to Ms Tweeden, and to the public. In our experience, we know Al as a devoted and dedicated family man, a wonderful comedic partner, and an honorable public servant. That is why we are moved to quickly and directly affirm that after years of working with him, we would like to acknowledge that not one of us ever experienced any inappropriate behavior; and mention our sincere appreciation that he treated each of us with the utmost respect and regard.

We send our support and gratitude to Al and his family this Thanksgiving and holiday season.”

“Would they defend him if he was Republican?”

It’s a valid question since Senate hopeful Roy Moore is also facing accusations, but we need to consider the full context of their actions. Moore is facing multiple accusations from women who were underage, several contacts at The Washington Post verified the stories, and at least two women made a point to say it wasn’t about politics and that they voted for Trump. The White House has essentially endorsed Moore, while Trump personally attacked Franken. If that doesn’t say politics then what does?

Other comments on Twitter range from accusing Franken of pedophilia, though Tweeden was not underage, to noting that Tweeden appeared to poke fun at sexual assault herself by grabbing late comedian Robin Williams on stage.

Meanwhile, in the Franken case, the women of SNL made it clear they thought Franken should have apologized. They went on record as character witnesses for Franken and noted there is no ongoing pattern of abuse. Instead, Frank has shown exemplary behavior.

Would the cast of SNL have made a different statement if Franken were a Republican? Or would it have been identical, considering that their account of his conduct would not have changed? The women of SNL made no mention whatsoever of politics, other than noting Franken was an honorable public servant. At the time of the incident in question, he was a comedian, not a Senator.

On the other hand, Yashar Ali, a freelance journalist, noted the similarity to the story of Roger Ailes, calling the timing of the SNL letter “highly inappropriate.”

Senator Franken has been a vocal critic of the Trump administration. Extremists on the fringe of the right-wing, close to Trump, have been threatened by Franken, so much so that Roger Stone said Franken won his Senate seat through “Democratic chicanery.” Stone and even more extreme conspiracy theorist Alex Jones broke the story of Franken and accused Franken of threatening their free speech. Stone and Tweeden are guests of the same Los Angeles radio station. Tweeden is an outspoken Trump supporter and regular guest on the right-wing conservative show, Sean Hannity.

When we start seeing connections to sources on the farthest fringe of the right wing, alarm bells justifiably go off. We need to question the credibility of these claims since they are coming from sources directly connected to conservative extremists and the administration. These are the very people who are most threatened by Franken’s quest for transparency and truth.

There have even been unverified rumors of a deal with Sinclair Broadcasting Group, owned by right-wing conspiracy theorists, the Mercer family, and former White House Chief Strategist, Steve Bannon.

Progressive people are champions of women’s equality, but as with any story, the context and facts continue to inform each case. In The Tweeden case, we still have to weigh the facts and evidence in our ultimate judgment about Senator Franken, just as we do with Senate hopeful Roy Moore. It’s consistent.

It would be naive to think that the extremists on the right or left wouldn’t seek to exploit the issue politically. Having seen the full context of allegations, many Republicans have decided to back Roy Moore anyway which shows just how low they will go to put party over country. In the case of Franken, we must also weigh all of the facts. The women of SNL’s support is just one part of the full context. The two stories have little similarity, other than involving political figures.

In the case of Tweeden, it’s the credibility of extremist political figures she is connected to that can’t be ignored.

One of the most important facts to consider is Franken’s own response vs. that of Roy Moore and the Republicans who still prefer him to any Democrat today. See below

I want to apologize to Leeann Tweeden, to everyone who was part of the USO tour, to all who've worked for me, to all I represent, & to all who've considered me an ally & supporter & champion of women. I am sorry. https://t.co/vrLCIcggg6

Franken has wisely opened up the investigation into the matter himself, and the facts will eventually come out. Many of Franken’s supporters believe the facts will prove that this was a political attack by extremists who messed with the wrong man.