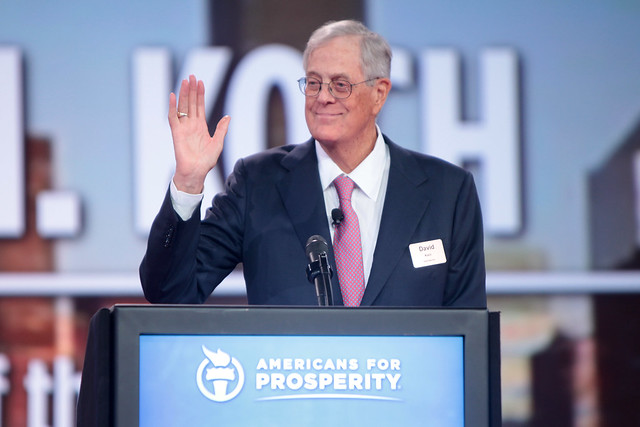 David Koch, the conservative billionaire businessman and activist, is dead at the age of 79, according to NBC News.

Koch was one of the richest and most controversial men in the United States, even though he didn’t seek the spotlight:

At the time of his death, David Koch was worth $42.4 billion.

With the wealth from their business, the Koch brothers helped to build a massive conservative network of donors for organizations that work to mobilize voters and sway elected officials in support of libertarian-leaning economic policies.

The network, led by the nonprofit Americans for Prosperity, has spent more than $1 billion over the past several elections to support candidates who adhere to their free-market, small-government, libertarian ideals.

Some consider Koch a great philanthropist and guardian of capitalism, but reaction on social media was much harsher:

I see some celebrating David Koch’s death. I’m not. I wish every major climate change denialist lived to be 200 years old, so they can see the horrors they are unleashing on the rest of us.

David Koch was one of the biggest polluters in American history, even if you disregard how he used his billions in politics to ruin the country and spread bile and venom. He’s dead? Oh well.

David Koch is dead. Like much of his generation, he will not live to see how he killed the rest of us. #Koch #DavidKoch pic.twitter.com/LxvKj2dHHd

David Koch accumulated a fortune of $42 billion and worked tirelessly for much of his life to make himself ever richer, at the expense of his workers, the country as a whole and the environment.

He wasn’t able to take a penny of his fortune with him when he died this morning.

This is the most positive thing he ever did for the world.

“When I pass on, I want people to say he did a lot of good things, he made a real difference, he saved a lot of lives in cancer research.”

I hope there’s an afterlife and that wherever you are, you’ve realized your true legacy—giving us Donald Trump and ruining this country.