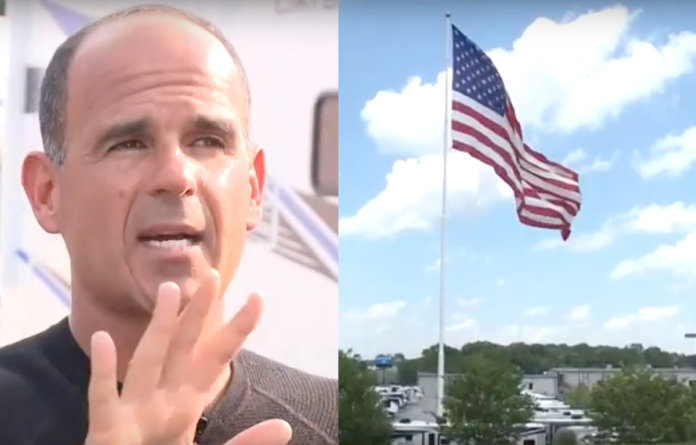 The city of Statesville, North Carolina, is not exactly well-known. Well, not like it’s neighbor, Charlotte, but one thing it is known for is an enormous 40 by 80-foot American flag flying over Gander RV, a business run by celebrity entrepreneur Marcus Lemonis, CEO of Camping World. Who could object to such a massive display of good ole’ ‘Merican patriotism? Especially from a past Celebrity Apprentice reality TV star? As it turns out, the City Council.

Now Lemonis and the City Council are locked in a dispute over their recent vote not to allow the oversized flag anymore. Lemonis says he’ll go to jail and continue to pay thousands in fines before the flag comes down. Now, keep in mind, Lemonis is not a resident of Statesville. It appears he’s from Lake Forest, Illinois. But with his firm stance to keep that flag flying, who do you think is likely to win in the end? An acquaintance of Trump via reality TV or the City Council? Get your popcorn ready.

On June 18, the Statesville City Council voted down an amendment that would allow a 40’x80′ flag to fly in a highway business zone. According to WCNC, the vote was 5-3 against the motion to amend the ordinance. The officials say it has nothing to do with patriotism, but with the city-wide ordinance. Lemonis could simply reduce the size of the flag, and he’d be within compliance. The ordinance requires flags to be three times smaller at maximum, or measuring up to 1,000 square feet.

“The city of Statesville had already issued a permit to Camping World to fly a 25-by-40-foot (1,000 square feet) American flag outside their Moreland Drive location.”

Back in May, an injunction was filed against Gander RV, and the court ordered the company to pay $50 for each day the flag remained flying. Camping World’s Facebook page claimed that the total would currently be over $10,000, dating back to October 2018.

Nevertheless, Lemonis is digging in his heels and making a stand to keep the oversized flag.

“The flag is not coming down under any circumstance,” Lemonis said.

Taking to Twitter, the CEO indicated the flag might be slightly more to do with advertising than patriotic display.

“The flags have been a part of my business strategy for years, they are up in most of my businesses including a barbeque restaurant that I have in South Carolina,” Lemonis said.

Flag got voted down again https://t.co/nvn6cpxrzu

As a man who runs multiple businesses, he intends to see more such flags flying in the future.

“As long as I feel the FAA is clear and people’s health, wealthiness, and safety are not being compromised,” Lemonis said.

Lemonis says it’s not a publicity stunt, but it would be easy to fly a smaller American flag. Would doing so be an offense to patriotism? Is it worth spending thousands of dollars to keep the flag? Well, in that case, all the free national publicity he’s getting sure beats the cost of advertising now doesn’t it?

Lemonis promoted the video shown below featuring veterans talking about their pride for the flag on Twitter. Snopes reported that a linked Change.org petition invited readers to support Gander RV’s stance and gathered over 100,000 signatures by mid-May.

I will not budge… I will not compromise… I’m grateful for who I am and what I have and it’s clear to me the reasons why… #usa I will not take the flag down ⁦@cityofsvl⁩ or any other city pic.twitter.com/i8bTBBxxr4

According to a CNBC report, Camping World saw a temporary downturn in stock value following the acquisition of Gander Mountain. Lemonis, well-known as a business guru, suggested it was due partly to “rookie mistakes” and poor spring weather as the company began introducing more RV vehicles. Lemonis expected to go from 130 RV dealership to more than 165 by the end of 2019, a 20% rate of growth.

A fascinating sidenote: In 2012, Lemonis dropped Camping World’s advertisement during the Celebrity Apprentice show after co-judge Donald Jr. made news for posing with rare animals he killed on safari in Zimbabwe alongside younger brother, Eric Trump.

“I wouldn’t spend another nickel with them,” said Lemonis.

Will now-President Trump be inclined to come to Lemonis’ aid for this oversized display of ‘Merica?

See more from WCNC below: