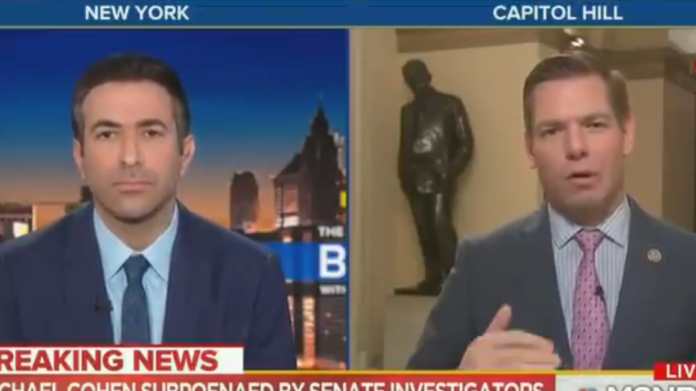 Just last week, shortly after it was revealed that Donald Trump’s former attorney, Michael Cohen, was planning to testify before a congressional committee, the president tweeted out what certainly sounded like a threat to a member of Cohen’s family:

Many legal experts have said Trump’s tweet is clearly witness tampering and should be prosecuted as such. It should also infuriate anyone who believes that no one is above the law, not even the president.

And as Rep. Eric Swalwell made clear Thursday, the Democratic-controlled House of Representatives is no longer in the hands of his GOP lackeys and will indeed hold him accountable. Swalwell told MSNBC host Ari Melber3..0:

“[Trump’s witness tampering is] a legitimate concern, but it would be more legitimate if the Democrats did not control the House of Representatives. The days of mob rule are over. We are no longer powerless. We are able to stop this type of intimidation, this type of tampering, this type of obstruction and finally hold the president accountable.”

For two years, Republicans in Congress did absolutely noting to fulfill their Constitutional obligation to serve as a check on the executive branch, allowing Trump and his administration to get away with anything they wanted, no matter how vile and illegal their words and actions were.

But now balance has returned to Washington, and Democrats are making it clear they will not allow this wannabe dictator named Donald Trump to run amok with no restraints. They aren’t going to be cowed by his bullying or tweeting.

As Congressman Swalwell noted, Trump does not have free reign to do as he pleases any longer. He is going to be challenged at every step, and our democracy will be stronger as a result of that newfound balance that was missing for two years.