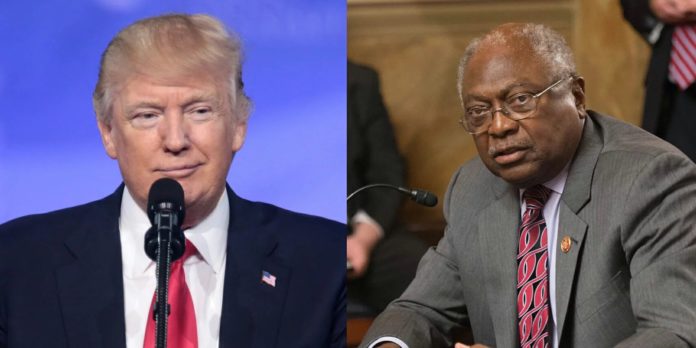 Rep. James Clyburn is the third-highest ranking Democrat in the House of Representatives, and on Tuesday he sounded a warning about how President Donald Trump and his family are an existential threat to democracy in the United States.

In an interview with NBC News, Clyburn was asked about Trump’s repeated attacks on the late Senator John McCain. Had he ever seen a political climate as toxic as the one in the country today? Clyburn responded:

“Adolf Hitler was elected chancellor of Germany. And he went about the business of discrediting institutions to the point that people bought into it. Nobody would have believed it now. But swastikas hung in churches throughout Germany. We had better be very careful.”

Clyburn also noted that McCain was a war hero and Trump’s attacks on the late senator are part of a larger targeting pattern by the president that includes Congress and the free press:

“We are asking for dire consequences. And I think it’s time for the Congress — House and Senate — to grow spines, and do what is necessary to protect this democracy. This man and his family are the greatest threats to democracy of my lifetime.”

Never in the history of this country has every institution of our republic been under sustained assault the way it is now with Donald Trump at the helm. He delights in undermining what has made us great for over two centuries and takes pleasure in degrading anyone who dares disagree with him.

Congressman Clyburn is right: Trump is trying to destroy this country, and he’s well on his way to doing exactly that.