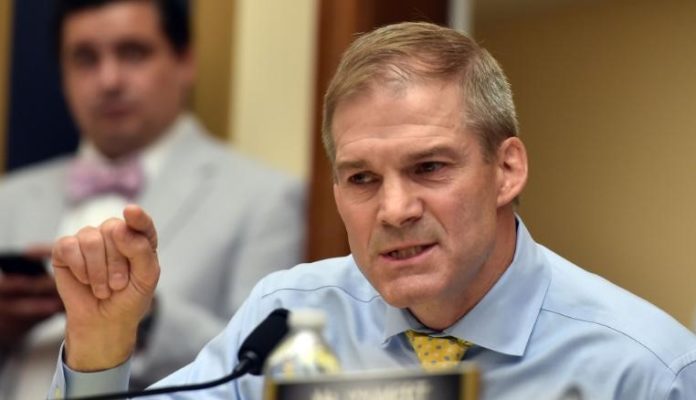 On Monday, a report from Politico revealed that a whistleblower who works in the White House Personnel Security Office had recently told the House Committee on Oversight and Reform that at least 25 administration officials had been granted security clearances even though they had disqualifying marks against them such as drug use, criminal conduct, and connections to foreign governments.

Rep. Jim Jordan (R-OH), who sits on the oversight committee, immediately responded to the Politico article, alleging that Democrats were merely trying to play politics with a matter as serious as national security, which is more than a bit ironic considering that Jordan has resolutely defended President Donald Trump no matter what he says or does, even suggesting that the Mueller investigation was a conspiracy formulated by the so-called “deep state” to take down the president, although he has never provided any evidence to back up his specious claims.

In a statement, Jordan wrote:

“Chairman Cummings’ investigation is not about restoring integrity to the security clearance process, it is an excuse to go fishing through the personal files of dedicated public servants. The process by which this matter has so far progressed has been anything but fair.”

Jim Jordan: “It is extremely unfortunate and disappointing that Chairman Cummings is now using this sensitive topic as a pretense for a partisan attack on the White House.”

He also says the 25 people include “non-political officials such as a GSA custodian.” pic.twitter.com/XRFZYRPtiP

It’s also instructive to keep in mind that this is very same Jim Jordan said he wasn’t the least bit concerned about hush money payments Trump allegedly made to women he had affairs with, commenting:

“I think it’s news we knew about.”

Is that right? If it was news we “knew about,” then why didn’t Trump disclose it before the election so the voters could render a judgement on such behavior?

Almost nothing Jim Jordan says makes a bit of sense. In that respect, he’s the perfect defender for the fact-free president.