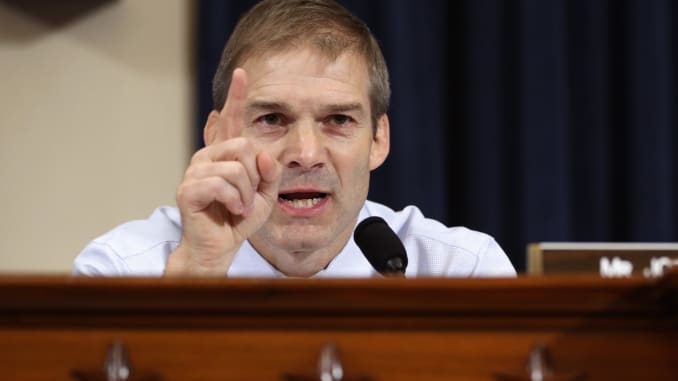 A state lawmaker in Ohio is trying to get answers in the sex abuse scandal that rocked Ohio State University, and says it may be necessary to subpoena Rep. Jim Jordan (R-OH) for his testimony in the matter. Before being elected, Jordan was a wrestling coach at Ohio State.

State Rep. Tavia Galonski said she intends to ask the chair of the committee she sits on to subpoena Jordan, who has repeatedly denied having any knowledge that (wrestling team physician) Dr. Richard Strauss preyed on athletes when he was the assistant wrestling coach at the school from 1986 to 1994.

Galonski’s request to seek a subpoena surprised her Republican colleagues, and the chair of the committee Galonski serves on, State Rep. Stephen Hambley (R), ruled that her motion was out of order on procedural reasons.

Despite the setback, Galonski said she intends to make another attempt at getting a subpoena against Jordan when the legislative committee meets again next week:

“Obviously a subpoena is like salt. You use it sparingly.

“It is our duty to the victims to make sure the record is complete before we vote on this bill. We’re doing real business here and shouldn’t we want a professional approach? (Jordan’s) name has been mentioned. The chair is a very thoughtful person. I believe (Hambley) would be supportive of that kind of due process.”

The bill Galonski is referring to is known as HB 249, which would allow victims of Dr. Strauss to sue Ohio State for damages related to their abuse.

News of the abuse that took place at the university first came to light 17 months ago when former OSU wrestler Mike DiSabato alleged that Strauss had sexually molested him. Hundreds of other athletes them came forward saying they had also been abused.

Jordan has maintained that he never heard any talk of abusing athletes while he was a coach, but was undercut by the results of an investigation earlier this year:

“An independent investigation conducted by law firm Perkins Coie concluded in May, based on ‘survivor accounts,’ that coaches and administrators at Ohio State did indeed know that Strauss was molesting male athletes and failed to sound the alarm or stop him. The report did not specifically name any of the coaches or administrators. It said Strauss abused at least 177 men between 1979 and 1997.”