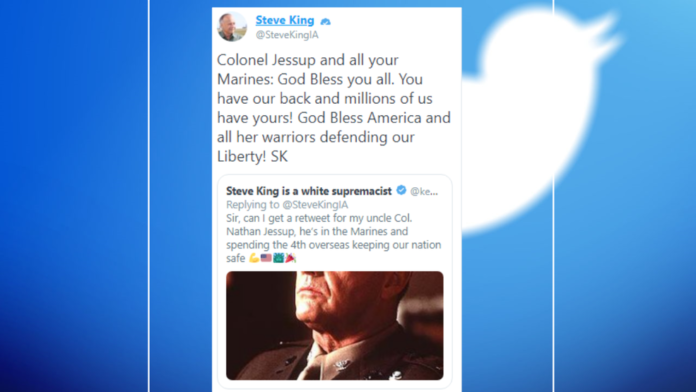 Rep. Steve King (R-IA) is one of the most disgusting and blatantly racist people to ever serve in Congress. Matter of fact, he’s such a embarrassment that he was stripped of his committee assignments earlier this year for praising the idea of white supremacy.

But on Thursday, King got hit twice by karma, HuffPost reports:

In both cases, Twitter users got him to retweet a message, then changed their user names to taunt the lawmaker.

One called him a white supremacist. The other suggested he drinks pee.

The first time was when Ken Klippenstein of The Young Turks asked King to send a message in support of his “uncle,” Col. Nathan Jessup. As you may know that’s the name of Jack Nicholson’s character in the movie “A Few Good Men.”

King was only too happy to share the tweet. But after he did, Klippenstein changed his username to “Steve King is a white supremacist” 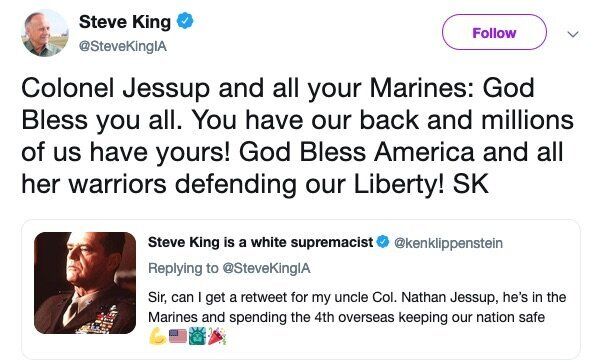 King deleted the tweet, but not before a screenshot was taken.

Later, King again fell for the same trick, and that Twitter user also got the best of the congressman:

That set off a fusillade of other requests for King to comment or retweet support of:

Steve King, could we take the time to honor CPL. Dwayne Hicks? pic.twitter.com/mOAzCMf8Ob

Wonder if I can get Steve King to give a shout out to my uncle Private Winger and his platoon? In a daring mission to rescue sensitive military hardware, they took out several commies. All after training themselves. pic.twitter.com/TFodQczwXt

Steve King @SteveKingIA We honor the courage and bravery of Private Benjamin Steve psst just so you know it’s really a movie about a fictional character @goldiehawn portrayed. 🤣😂👇 pic.twitter.com/hyeFyBsz9g