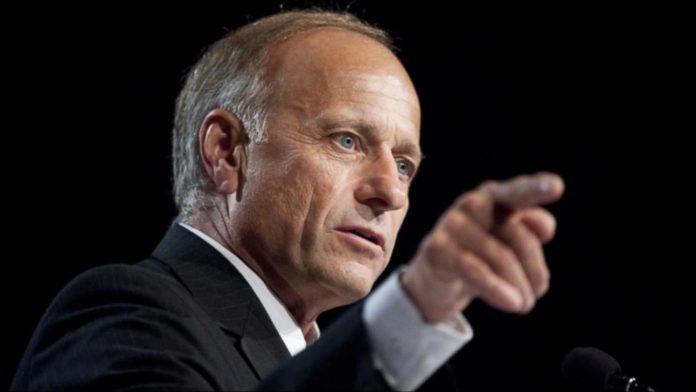 In August, Rep. Steve King (R-IA) visited Austria, which is no surprise since that’s also the birthplace of Adolf Hitler. And while King was in Austria, he gave an interview to Caroline Sommerfeld of the Austrian far-right propaganda site Unzensuriert in which he declared that immigration is bad for any country that wants to remain white.

In the interview, King praises far right white nationalist movements that have been sweeping across Europe, commenting:

Translation: Anyone that isn’t white and Christian isn’t welcome.

King even said it was time for Germany to stop feeling guilty for the crimes of the Nazis:

“And that which caught me most of all, (German Chancellor Angela Merkel) said, ‘The violence which they perpetrate against us will not be as severe as that which we have perpetrated against others in our most recent history.’ Merkel was referring to Nazi atrocities. It is Nazi guilt which should not be laid at the feet of young Germans today. They were not responsible for that time in history.”

The controversial congressman also tried to assert that legal abortion is the reason for what he has called “cultural suicide,” telling Sommerfeld:

“In the US, we have almost a million abortions a year, babies who would be raised by American parents. Then we bring in 1.2 million legal immigrants a year and add another 600,000 or so illegal immigrants … The US subtracts from its population a million of our babies in the form of abortion. We add to our population approximately 1.8 million of ‘somebody else’s babies’ who are raised in another culture before they get to us.”

Congressman King is facing a tough reelection challenge in the Fourth District of Iowa from Democrat J.D. Scholten, who has been endorsed by the Des Moines Register. We can all hope that King’s days in Congress are numbered. If he loses, perhaps he can move to Europe and try to set up his own personal thousand year reich.