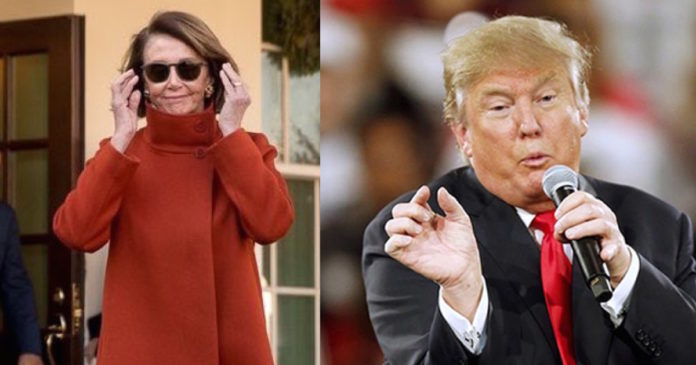 House Speaker Nancy Pelosi (D-Calif.) knows exactly what she is doing by treating President Donald Trump like a petulant child, and her strategy is clearly working, according to the new report.

When Pelosi accused Trump of being “engaged in a cover-up last week, his response played right into her hands.

He stormed out of a meeting with Democratic leadership and threw a hissy fit in the Rose Garden as the nation watched in embarrassment.

Trump further made a fool of himself and demonstrated that he is incapable of handling the nation’s business while being investigated at the same time even as he falsely accused Democrats of not being able to legislate and investigate.

On Thursday, Pelosi cited Trump’s meltdown as proof that he’s unfit to remain in office.

“I wish that his family or his administration or his staff would have an intervention for the good of the country,” she said. “There’s no question, the White House is just crying out for impeachment. That’s why he flipped yesterday. This is not behavior that rises to the dignity of the office of president of the United States.”

In short, Pelosi is making a case for impeachment every time Trump reacts the way he did this week, and she weakens his case for re-election in 2020, especially when he threatens to not work on policy while he’s being investigated, including on major infrastructure legislation and lowering drug prices, two policies Americans overwhelming support.

Over the weekend, the Washington Post reported that “Pelosi’s allies said her taunting of Trump now is intentional, designed to get under his skin and elicit an angry reaction.”

Pelosi’s strategy is working and the results prove it. Trump now looks even more unstable and incapable of doing his job. Ever since Pelosi took over as House Speaker, she has been getting the best of Trump. He looks ineffective and weak while she looks strong and is getting things done.

A senior Democratic aide told Axios what Pelosi has achieved by infuriating Trump.

“She’s succeeded in making three things very clear: 1) She’s interested in getting things done and he walked away again; 2) She’s the only adult in Washington and is leading Dems with precision; 3) He’s a toddler who pays a price for attacking her because he resorts to such publicly infantile lows to attack her.”

A Trump ally agrees, telling the publication that this is the kind of thing they do with their dog.

Trump is likely going to keep repeating this cycle as Pelosi continues to prove that Washington is her town and he’s just her whiny little b*tch.