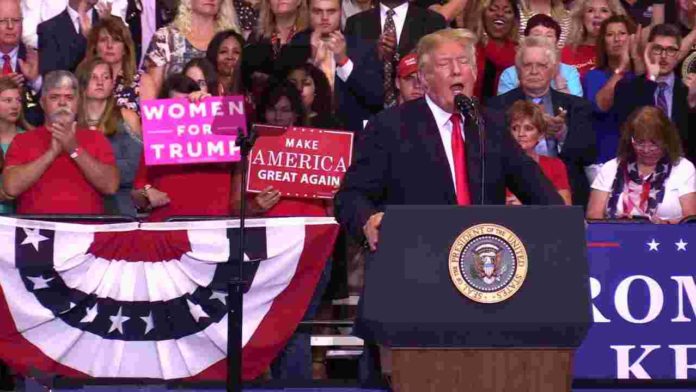 President Donald Trump is seriously considering delivering his State of the Union (SOTU) address at an informal campaign rally instead of in writing or before a joint session of Congress later this month.

Due to the government shutdown and the fact that Secret Service agents are not being paid, House Speaker Nancy Pelosi asked Trump to delay the SOTU until after the shutdown is over, citing security concerns.

“Sadly, given the security concerns and unless government re-opens this week, I suggest that we work together to determine another suitable date after the government has re-opened for this address or for you to consider delivering your State of the Union address in writing to the Congress on January 29th,” she wrote in a letter.

Trump has up to now refused to respond to Pelosi’s request, instead, retaliating with a letter of his own canceling her trip overseas to visit the troops in Afghanistan.

And now it looks like Trump is thinking about holding a campaign rally to deliver the SOTU, in yet another way to disgrace the office and cheapen traditions that go back over one hundred years.

Trump could deliver his State of the Union away from the Capitol and might even do a rally, senior official confirms. “Contingencies need to be planned,” official says.

No president has ever not delivered a SOTU address to Congress in person or in writing.

The Constitution says that the president “shall from time to time give to the Congress Information of the State of the Union, and recommend to their Consideration such Measures as he shall judge necessary and expedient. Early presidents delivered the State of the Union to Congress in person before Thomas Jefferson started delivering it in written form, which became the tradition until Woodrow Wilson delivered a SOTU speech to Congress in 1913, and that’s the way it’s been ever since.

Frankly, delivering it at a rally full of Trump supporters who are guaranteed to cheer everything their dear leader says won’t go over very well among the rest of the American people, who expect the president to speak to the entire country instead of just those who support him.

Trump is being petty and he appears to be scared of the fact that Democrats outnumber Republicans in Congress, which means he won’t get very loud applause.

The State of the Union address is not a rally occasion, and he should not be allowed to cheapen that tradition.

.@realDonaldTrump can call his speech whatever he wants, but if it isn’t given to joint session of Congress, it isn’t a State of the Union address.

Yeah, he could do that. But I’m thinking all the shine would be gone from it. So instead of congress he could give it to his supporters? Why would I watch that on TV. I’ll be sure to stream a movie that night instead. And shut off my receiver box. Ooh and have popcorn ready! pic.twitter.com/HTGU6dxpUL

Unless Nancy Pelosi invites @realDonaldTrump to deliver a SOTU, he’s not doing one. He can call it whatever he wants, but it’s still just Trump another rally.

Nothing says “State of the Union” like a Nuremberg like rally in a North Dakota like setting.
Awash in crowd adoration of the mindless.
“Lock Her Up”…”Build a Wall”…
We have become an Orwellian parody…
MAGA 😢

Indeed, the crowd at Trump’s rally are sure to be exclusively his supporters and will likely scream offensive chants and threaten the media covering the event, two things that do not happen during a SOTU delivered before Congress. In addition, Confederate flags would fly and t-shirts and placards with offensive slogans would appear. This would be an insulting and offensive speech delivered in a style that will likely see Trump going off script to rant and ramble on about the smallest of perceived slights. Instead of being a unifying speech, Trump would be delivering a divisive speech full of accusations and lies just like he did when he delivered a prime-time Oval Office speech earlier this month.

The major networks made a mistake by airing that speech. They should refuse to air this one. The State of the Union is not a campaign speech at a rally. It’s an annual report that’s supposed to lay out the issues our nation faces and propose an agenda to solve them. There’s a clear distinction and the media should recognize that and just refuse to air it as they have done with multiple Trump rallies since he took office. We all know that this is a fake SOTU address that demeans our nation’s traditions. The media should treat it as such.

As an alternative, if Trump does decide to turn the SOTU into a circus, the networks should consider giving that time to a Democratic member of Congress who will deliver a proper address fit for the occasion. Republicans will be pissed, but at least the nation would be spared from having to watch Trump’s dumpster fire rally.