The United States Blues
Home News REPORT: Trump drafted a letter that proves he fired Comey over the... 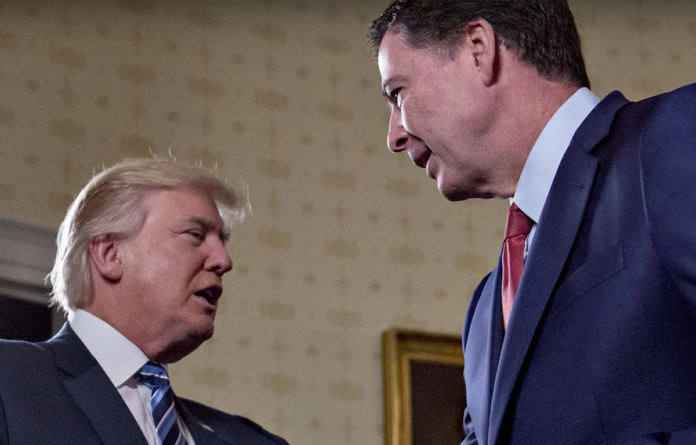 President Donald Trump fired former FBI Director James Comey because of the Russia investigation. He admitted as much during an NBC News interview with Lester Holt in May 2017. But now a letter he drafted to fire Comey has come to light linking the firing to the probe.

Murray Waas of the New York Review of Books has allegedly gained access to Trump’s original draft of the letter, the final version of which included no references to the Russia investigation.

Trump dictated an early draft while at his Bedminster golf course in New Jersey in 2017. The rain had prevented him from playing golf on the taxpayer’s dime that day so he spent the time fuming until he decided to fire Comey, whom he had asked to kill an investigation into disgraced former National Security Adviser Michael Flynn.

Comey, of course, refused to drop it, and we also know that the FBI had opened a counterintelligence investigation ordered by former FBI deputy director Andrew McCabe into the Trump campaign that revealed multiple contacts with the Russians, including by Paul Manafort and George Papadopoulos.

According to Waas’ report:

In the letter, President Trump railed against the Russia investigation as “fabricated and politically motivated.” He complained about then Deputy FBI Director Andrew McCabe’s involvement in the investigation, claiming bias since McCabe’s wife had run for state office as a Democrat. The letter also expressed frustration that Comey had refused to issue a public statement saying the president was not under investigation. In part because of these things, the draft letter said, morale was at an all-time low at the FBI.

“While I greatly appreciate your informing me, on three separate occasions, that I am not under investigation concerning the fabricated and politically-motivated allegations of a Trump-Russia relationship with respect to the 2016 Presidential Election, please be informed that I, along with members of both political parties and, most importantly, the American Public, have lost faith in you as the Director of the FBI and you are hereby terminated,” Trump originally wrote.

Trump claimed that shortly after he became president, he had told Comey that he was only allowing him to stay on in his job as FBI director on a probationary or trial basis; he had then decided to fire Comey when he failed to improve his performance—a claim that Special Counsel Robert Mueller concluded was likely concocted by Trump. By the time a final version of the letter was made public, the president’s advisers had intervened and the letter was cut from four pages to only five sentences, with all of the president’s aforementioned references to the Russia investigation removed.

And as it turns out, former Deputy Attorney General Rod Rosenstein is the one who helped Trump write the final version of the letter because even he knew how bad it would look if Trump linked Comey’s firing to the Russia investigation.

Rosenstein recently denied that removing the lines from the letter had any effect on the investigation, but the fact is that firing Comey to derail the investigation is obstruction of justice and he basically tried to help Trump obstruct justice and get rid of the evidence.

However, Trump couldn’t keep his mouth shut, which is why he bragged during the NBC interview that he fired Comey because of the investigations and later boasted to the Russians inside the Oval Office that firing Comey takes the “pressure” of the investigation off of himself.

As Special Counsel Robert Mueller prepares to testify before the House Judiciary Committee, Democrats should consider putting some focus onto Comey’s firing, which is listed by the Mueller report as one of at least ten instances of obstruction Trump committed to undermining the probe.

The draft letter is clearly Exhibit A.