The United States Blues
Home News Reporter Calls Out Kevin McCarthy For Being A Hypocrite After He Whines... 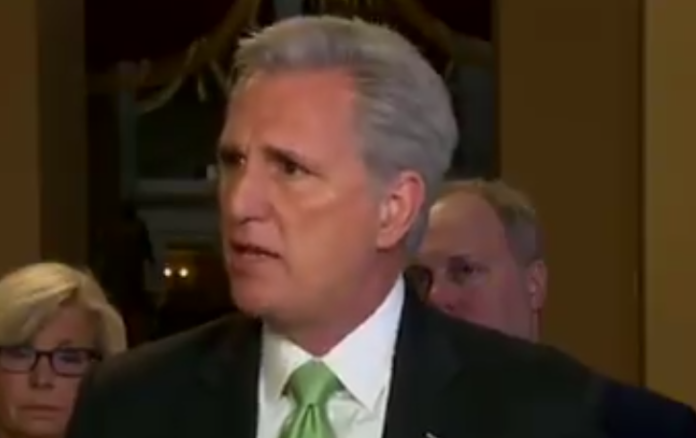 House Minority Leader Kevin McCarthy (R-Calif.) threw a hissy fit over foul language used by freshman Rep. Rashida Tlaib (D-Mich.) on Thursday when she referred to President Donald Trump as a “motherf***er” while calling for his impeachment.

While speaking to reporters on Friday morning, McCarthy angrily whined about the language.

“Do you know what happened in the last Congress when Republicans were in the majority?” he began. “You know what our freshman class did? They put a resolution together to actually work with one another, to not use foul language. They got almost every single freshman to sign onto it! That is the difference with this new Congress and it’s wrong.”

That’s when a reporter immediately called out McCarthy for being a hypocrite.

“The president, not too long ago, referred to a woman as ‘horse face,’” the reporter said. “Who within your caucus called out the president for that type of language?”

It’s a burn for the ages, and one that McCarthy could only respond to by claiming that many Republicans criticized Trump for using such language, even though he didn’t name any examples specifically.

MCCARTHY: “You know what our freshman class did? They put together a resolution to not use foul language. This is the difference & it’s wrong.”

REPORTER: But Trump recently called a woman ‘horseface.’ Who within your caucus called him out? 🔥🔥🔥

M: “I think a lot of them did” pic.twitter.com/axHOjBOMau

And the reporter was right to call out McCarthy. After all, Trump’s Twitter feed is a swamp full of insults and offensive language attacking his critics and opponents.

“Federal Judge throws out Stormy Danials lawsuit versus Trump. Trump is entitled to full legal fees.” @FoxNews Great, now I can go after Horseface and her 3rd rate lawyer in the Great State of Texas. She will confirm the letter she signed! She knows nothing about me, a total con!

Mike Pompeo is doing a great job, I am very proud of him. His predecessor, Rex Tillerson, didn’t have the mental capacity needed. He was dumb as a rock and I couldn’t get rid of him fast enough. He was lazy as hell. Now it is a whole new ballgame, great spirit at State!

Congresswoman Maxine Waters, an extraordinarily low IQ person, has become, together with Nancy Pelosi, the Face of the Democrat Party. She has just called for harm to supporters, of which there are many, of the Make America Great Again movement. Be careful what you wish for Max!

And these tweets are just the tip of the iceberg as Trump has also attacked and insulted Admiral William McRaven and the late Senator John McCain, and so many others. Yet Republicans never called Trump out on any of those occasions, but have the gall to all of a sudden whine about Democrats being uncivil?

As wrong as Tlaib is to have used such language, she did not use it on the House floor. It should be pointed out that Tlaib is new at being a lawmaker and she has a lot to learn. Plus, she is already being warned by Democratic leaders, which is more than Republicans have ever done when Trump says something offensive. While her language is unacceptable, if Republicans are going to get pissy about it, they should at least call out Trump for doing the same thing inside the White House and at rallies.

It’s just more of the same “Do as we say, not as we do” mentality of Republicans like McCarthy.