The United States Blues
Home News Republican attacks Jimmy Carter in defense of Trump and gets trounced for... 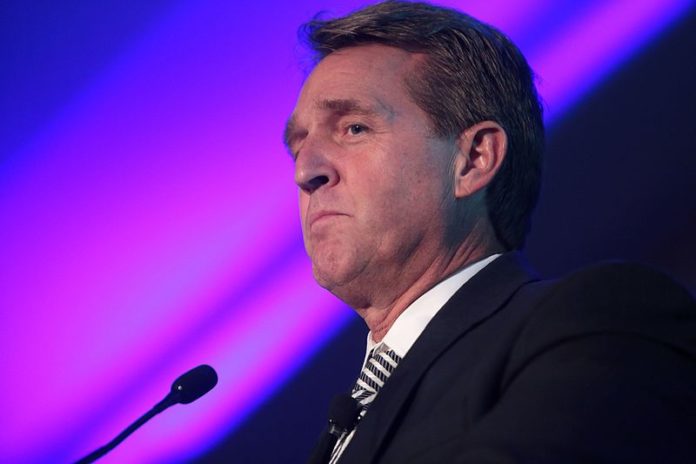 Former Senator Jeff Flake (R-Ariz.) once again proved how much of a flake he is on Friday by daring to attack former President Jimmy Carter in defense of President Donald Trump.

Earlier this week, Carter suggested that Trump is an illegitimate president because the Russians helped get him elected, which is the truth because the Mueller report clearly shows that Russia systematically interfered with our democratic process in 2016 by hacking the DNC and Clinton campaign and by flooding social media with vile propaganda.

“He was put into office because the Russians interfered,” Carter said.

Asked if that means Trump is illegitimate, Carter replied:

“Based on what I said, which I can’t retract.”

Again, he’s telling the truth, but Jeff Flake threw a hissy fit about it.

This is an awful thing for one American President to say about another. Argue that he shouldn’t be reelected, sure, but don’t say that he wasn’t legitimately elected.https://t.co/jRjGdH6n9Q

We need to stop trying to disqualify each other. I could not support President Trump largely because of his awful embrace of birtherism. President Carter calling President Trump illegitimate is not right either. We should be better than this.

Funny, I don’t recall Flake coming to former President Obama’s defense when Republicans called him illegitimate. Trump literally received help from the Russians to win an election. Had the Russians not meddled on his behalf, he probably would have lost.

Twitter users didn’t let Flake get away with attacking the beloved Carter.

It must be very upsetting for you to see someone with a spine saying the things you were too much of a huge f***ing coward to say.

Oh, bite me, @JeffFlake. You always were a gutless politician, and you haven’t changed a bit since you left office.

Oh please. You sanctimonious coward. You, of all people, are going to question Jimmy Carter’s ethics? You don’t belong in the same conversation as Jimmy Carter.

Meanwhile Trump did it to Obama for 8 years just because he hates black people.

Look who’s trying to crawl back to Trump. Jeff, you couldn’t shine President Carters shoes. You are gutless.

Dude, you’re not getting paid to look weak anymore. Go do something else.

Flake can slither back under the rock he came from now.