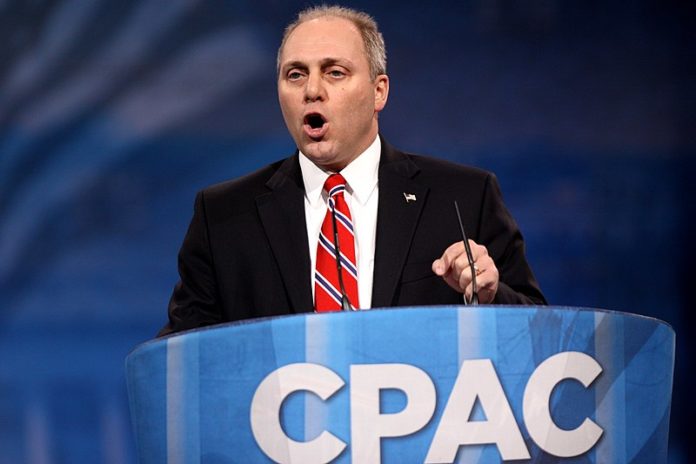 As we all know, the 116th Congress is the most diverse in American history. There are now more than 100 women serving in Congress 100 years after passage of the 19th Amendment. Among them are the first two Native American women, the first Somali-American woman and the first Palestinian-American woman.

But this diversity is mostly on the Democratic side of the aisle while the Republican caucus is still dominated by old white men with very few women and people of color to be found.

Rather than take responsibility for their own lack of diversity, Republicans have taken to blaming Pelosi instead.

“I’ve noticed that when female members run on the Republican side, Nancy Pelosi will spend a lot more money, in many cases twice as much more to defeat Republican female candidates in incumbents,” Scalise said during the launch of a new PAC by Rep. Elise Stefanik (R-N.Y.) this week called E-PAC, which will supposedly seek to help more Republican women run for Congress.

Scalise did not have an real evidence to back up his accusation against Pelosi, so he made some up by whining about Democrats spending money to defeat Republican candidates and incumbents such as former Rep. Mia Love (R-Utah.) who was defeated this past November by her Democratic opponent in a deep red state. He also threw in former Florida Reps. Allen West and Carlos Curbelo who both lost to Democrats in their races, Curbelo in the most recent election and West in 2012.

“And when I go look back, in Mia Love’s race, it was the most expensive race in the country the first time she ran and she lost barely in a recount,” Scalise complained. “She ran again two years later, that was the second most expensive race in the country, and she won. And you can see in this last cycle, Pelosi spent millions of dollars to ultimately take her out. And you can see that and a lot of these races, and I so I think we all need to be aware.”

“We need to do a better job of recruiting to make sure we recruit really good female candidates and what Elise PAC is doing, E-PAC, is making sure that we recognize that when female candidates run as Republicans, Nancy Pelosi does not want our party to look diverse,” he concluded.

So, Scalise is literally accusing Pelosi of the GOP’s lack of diversity by whining that Democrats spent money to help their candidates win. It’s as if Scalise is saying Democrats should let Republican candidates win if they are female or a person of color. You know, because Republicans are so willing to do the same, like when they let Andrew Gillum defeat racist Ron DeSantis in the Florida governor’s race.

Or how about when Republicans let Amy McGrath beat Andy Barr in Kentucky? No, Barr won that race.

Their problem is not going to magically solve itself by blaming Pelosi. This failure to take responsibility for their own party’s failings is why the GOP tent is getting smaller and smaller, not to mention the flirtations with white supremacists and racist dog-whistling.

Even GOP strategist Stuart Stevens realizes that the GOP is stuck in the 1950s because that’s where they want to be right now.

The visuals of new House should send a shiver through anyone who cares about future of Rep. Party. One side looks like America & our future, the other looks like Board meeting of 1950’s corporation. A basic law of politics: be for the future not past. There’s more of it.

He even pointed out that there are state-level Republicans that national Republicans could learn from, but are ignoring, apparently in favor of blaming Pelosi instead of themselves.

There is a clear blueprint for great Republican success with @CharlieBakerMA and @LarryHogan. They have more customers in rough markets. But instead of studying & learning from their success, national R Party basically ignores them. Crazy. https://t.co/9kbAXlYkna

The bottom line is that Republicans should look inward and strive to change from within if they really care about being a more diverse party. Blaming Pelosi and crying about Democrats competing with Republican candidates does not help their cause. It just makes Republicans look like sore losers who only pretend they care about diversity.

ABOUT US
Lefties, Liberals, Progressives, Social Justice Warriors, Old Hippies, Concerned Millenials, Reformed Republicans and Democrats of Whatever Stripe – Welcome Home! We offer aggregated news – which means our writers credibly source and report on the news of the day. In all fairness, our team leans left and may editorialize from time to time but we are committed to giving you the facts. No tin-foil hat conspiracy theories here! Our Activism Resource Database is second to none and covers the spectrum from Animal Rights to World Peace (there were no categories that begin with Z). We make every effort to give you the most current information on ways you can make a difference. Whether you are an Armchair Activist or Full-Blown Social Justice Warrior we have something for you.
Contact us: ad[email protected]
FOLLOW US
© 2019 TheUnitedStatesBlues.com