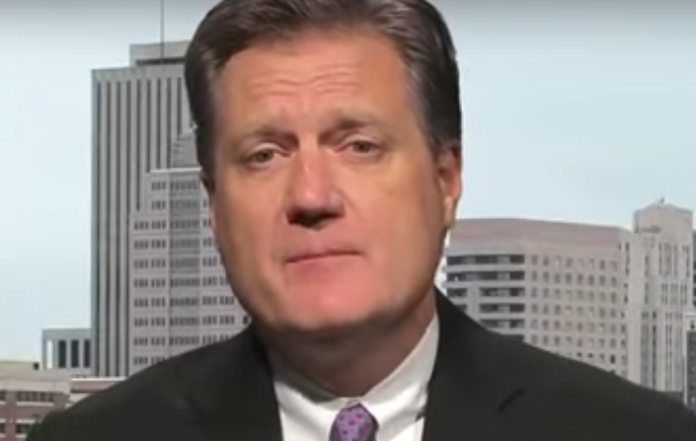 Trump has been disgustingly attacking McCain all week to the horror of the McCain family and the nation, yet few Republicans have rebuked him for it. One of those few is Senator Johnny Isakson (R-Ga.), who rebuked Trump’s remarks as “deplorable” in a speech on the Senate floor earlier this week.

During an interview on CNN Thursday morning, Turner had his own opportunity when asked by Berman what he thought of Trump’s attack considering he was there in the room when Trump launched it.

Rather than address the attack, however, Turner began ranting about Hillary Clinton and complaining about McCain having the Steele dossier in his possession.

“I think what’s come to light in most recent days is, of course, the use of the discredited dossier and it is being placed in McCain’s hands by Democratic Party operatives by Christopher Steele, who is being paid by Hillary Clinton,” he said before Berman cut him off.

McCain passed the dossier, some of which has actually been verified, to the FBI. But it turns out the FBI already had it anyway. So, in the end, McCain did not trigger the investigation because a probe was already ongoing.

Berman called Turner out for not answering his question, but the Republican lawmaker and Trump supporter refused to end his rant.

“I’m saying over the recent days the attempts to use John McCain to legitimize the discredited dossier for the purposes of initiating an investigation against the president has come to light in testimony!” he continued, once again drawing a stronger interruption from Berman.

“Congressman, again, none of this gets to my question,” Berman said. “Does it justify, congressman, the president of the United States at a White House-funded event in Ohio, in your home state, talking about the funeral of a human being, let alone a war hero like John McCain who passed away in August?”

But even then, Turner refused to answer, only saying that he was “saddened” that Trump did not focus on celebrating the tank plant he spoke at, and resumed trashing McCain while making multiple false claims about him and the dossier and testimony by someone McCain knew but did not actually work with as Turner claimed.

Berman spent much of his time fact-checking Turner, but in the end, his main question to him remained unanswered, just another disrespectful slap in the face to McCain.

The Republican Party truly has no more honor and dignity left. Rather than defend McCain, a dead war hero and Republican icon, Turner spent his time defending Trump and spreading his propaganda in an effort to discredit the Russia investigation.

It’s absolutely disrespectful and unconscionable, and Republicans should be ashamed of themselves.