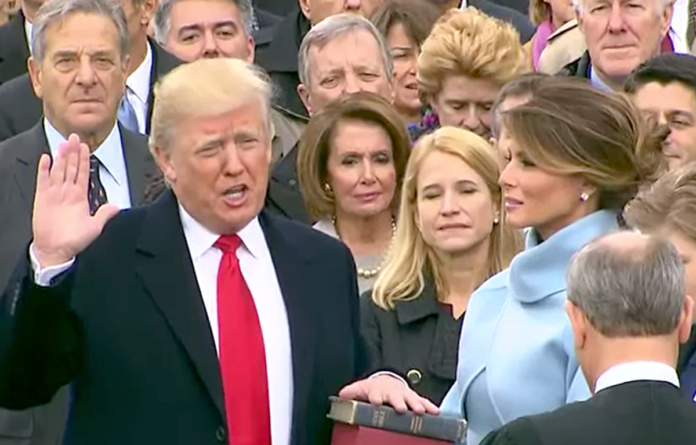 This week, Trump appeared on an ABC News interview, admitting that he would find nothing wrong with accepting dirt on his political opponents from any foreign country. He then called the FBI Director “wrong” for suggesting otherwise. The Daily Beast called out Trump as a “walking talking national security danger” following the interview. Now a select few conservatives are finally admitting this violates Trump’s Oath of Office.

Let’s face it: Trump is not protecting our Constitution while inviting foreign powers like Russia to once more meddle in our elections. Has Trump learned absolutely nothing? Are Republicans now officially welcoming attacks on our democracy?

At least one Republican group, Republicans for the Rule of Law, and its director, former Weekly Standard editor, Bill Kristol is stepping up to say enough is enough. The group has released an ad that could air on Fox News, calling for Nancy Pelosi and Congress to protect our elections, but falling short of calling for impeachment.

The ad shows Trump and Congress taking their Oaths of Office, but have they long-since forgotten all about what that really means? It then shows Trump’s shocking appearance with Former White House Communications Director George Stephanopoulos.

This ad from Republicans for the Rule of Law airs tomorrow. Our elected officials all take an oath to defend the Constitution. It may be hopeless to ask the president to honor his. But Congress? pic.twitter.com/JfU5a8cv1W

Kristol does not hide the fact that he loathes what Trump has done to America.

On Friday, Kristol called out an image shared by the official White House Twitter account for Flag Day in which Trump clings to the flag as “the desecration of the flag.” In another Tweet of the same image, he stated, “How far toward the Third World we’ve sunk.”

The desecration of the flag. https://t.co/wbL8VZHtSg

Moments ago, Kristol called attention to a story about Secretary of the Treasury Steven Mnuchin’s wife, Louis Linton, who has complained that she isn’t treated more like the UK’s Meghan Markle or Kate Middleton. Kristol acknowledges that Trump’s administration has created a climate for oligarchs.

No one has done more to damage support for democratic capitalism in America than Donald Trump, his fellow oligarchs, and their entitled hangers-on. https://t.co/yCGJps5egf

The Huffington Post noted that earlier this week, Republicans for the Rule of Law reminded Congress their duty to protect its citizens from foreign threats.

“If the president shirks his responsibility with one eye on his personal gain, Congress needs to use its full powers ― investigative and legislative ― to protect the country,” the organization said.

A previous ad from the organization called on GOP members of Congress to seriously consider the multiple obstruction charges against Trump. The ad compares it to the days of Nixon when Republican representatives were forced to admit that it appeared Nixon had done wrong. These days, the oligarchs like Mitch McConnell are utterly complicit.

Republicans for the Rule of Law is urging GOP members of Congress to take seriously allegations of obstruction of justice made against Trump in a new ad. https://t.co/DHuLUpbmuq pic.twitter.com/SDKQ2Wotlq

On Thursday during her weekly press conference, Speaker of the House Pelosi suggested that McConnell may be connected to the flow of Russian money, so much so that he fails to uphold his own Oath of Office. Before we can hold Trump accountable, must we also hold corrupt oligarchs/senators of America accountable as well?

In the meantime, what can be done to protect our elections? We certainly won’t get any help from Republicans in the Senate.

“…on Thursday, Sen. Mark Warner (D-Va.) tried to pass a bill via unanimous consent that would require political campaigns to report offers of foreign assistance to the FBI. The bill failed when Sen. Marsha Blackburn (R-Tenn.) objected.”

Clearly, America is facing perilous times when the House concludes our corrupt senate will do nothing to stop a corrupt president.