The United States Blues
Home Politics Congress Republican group reminds Graham and McConnell they once said Russia was a... 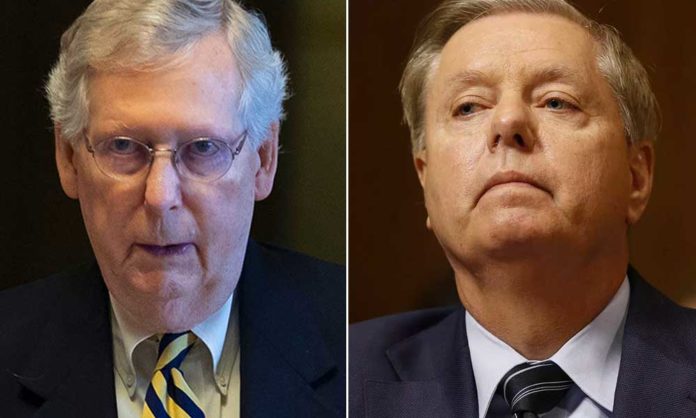 Not so long ago, both Senators Lindsey Graham (R-SC) and Mitch McConnell (R-KY) were convinced that Russia attacked the 2016 election and even said so, with McConnell even going so far as to declare:

“We believe the European Union countries are our friends, and the Russians are not.”

For his part, Graham remarked in 2018 that he was “1,000% convinced that the Russians meddled in our election.” And he added:

“I’m hoping that the president will call the Congress together to secure our election the best we can. I don’t know how any of us can go to our constituents if we do nothing. The one thing I cannot live with is not trying.”

And yet both men now seem to be of the opinion that there doesn’t need to be legislation to protect the upcoming 2020 election, and their words have come back to haunt in them powerful new ads being run by a Republican group that calls itself Republicans for the Rule of Law, HuffPost reports:

“Election security isn’t a Republican issue or a Democratic issue,” said Chris Truax, a spokesperson for the group. “It’s a national security issue that deserves the attention of every politician and every voter in America. Foreign adversaries have shown that they can hurt us by interfering in our elections, and we can’t let that happen.”

In the ad aimed at Graham, after quotes from the South Carolina senator, this message appears on the screen:

“Senator Graham. Are You Still Trying?”

Those viewing the ad are then encouraged to contact Graham’s office “and tell him to secure our elections.”

The ads, which will run on Fox News over the weekend, and the group is also running similar ones that ask the same question of Senators Marco Rubio (R-FL), James Lankford (R-OK), and Roy Blunt (R-MO).

Even though the Senate is back in session after its summer recess, McConnell continues to refuse any moves to bring election security legislation to the floor for a debate or vote. His steadfast recalcitrance has even earned him a nickname and hashtag on Twitter, #MoscowMitch.

Here are the videos: