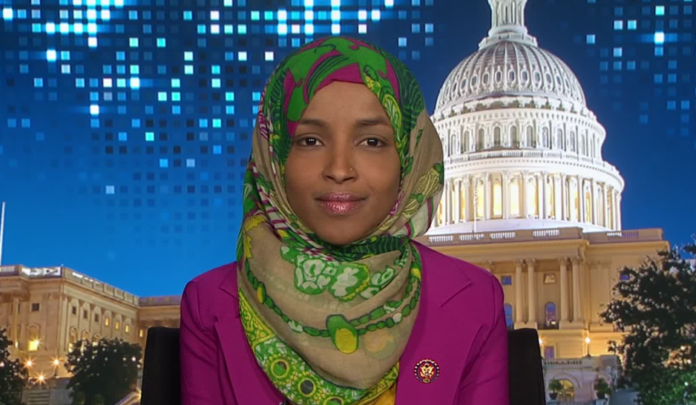 Rep. Lee Zeldin (R-N.Y.) made a bigoted complaint about Rep. Ilhan Omar (D-Minn.) being placed on the House Foreign Subcommittee on Oversight and Investigations, and then threw a hissy fit after she called him out for it.

Omar is the first Somali-American to elected to Congress. And she is also a Muslim, which Zeldin is apparently uncomfortable with, which is why he decided to whine about it on Twitter and suggested that Democrats should be ashamed of giving her a committee assignment.

Was just selected as Ranking Member of the @HouseForeign Subcommittee on Oversight & Investigations! Just learned Freshman Rep. Ilhan Omar was also put on this committee w oversight of US foreign policy. Crazy to watch what House Dems are empowering/elevating.

Zeldin could have refrained from attacking Omar, but he didn’t. Instead, he demonstrated his bigotry and racism.

Upon finding out about the tweet, Omar, who has no problem taking on her Republican colleagues, responded by predicting Zeldin will “lose his marbles” because she is standing up to his bullying and even shared a laugh with a Twitter user who joked that Zeldin just found out the Muslim ban doesn’t prevent Muslim lawmakers from serving on committees.

Don’t mind him, he is just waking up to the reality of having Muslim women as colleagues who know how to stand up to bullies!

It’s gonna be fun watching him lose his marbles 😜 https://t.co/FPEtcxW4GN

Of course, Zeldin did exactly what Omar said he would do. He took to Twitter and went full snowflake by accusing Omar of supporting terrorists and being anti-Semitic.

Those poor innocent ISIS fighters & Palestinian terrorists right? Give me a break! That’s a problem no matter your religion or gender Ilhan. Your anti-Semitic & anti-Israel hate is strong & wrong & those terrorists have US blood on their hands as well. https://t.co/yVmS6Tdd8T

Twitter users were not amused by this unprofessional behavior by a lawmaker, and proceeded to humiliate him.

Wow, as an elected official sir, you’re condensing, misogynistic and racist. The @gop is truly the party of intolerance and sexism. Act with some professionalism, it’s embarrassing.

And there go the marbles… right into the Palinesque word salad.

When is this sad excuse for an “adult” up for re-election? And isn’t this the guy whose campaign mailed Dem voters instructions to postmark their absentee ballots with the wrong date?

I have a feeling this Islamaphobic GOP Rep will be constantly triggered now that Rep. Ilhan is also serving with him on the House Foreign Relations Committee.

@GOPLeader your member needs to be censured and removed

As a constituent in LZ’s district, this is embarrassing.

Zeldin should be ashamed of his behavior toward a duly elected member of Congress. Omar’s religion does not define her and it’s outrageous that he would suggest she’s anti-Semitic or a supporter of terrorists because she just so happens to be a Muslim. It would be like saying Zeldin must support the KKK because he’s a Christian. Clearly, he’s just another Republican who needs to be ousted from office in 2020. And when he is, Omar will still be there fighting for the people of Minnesota and bringing much-needed diversity to Congress.