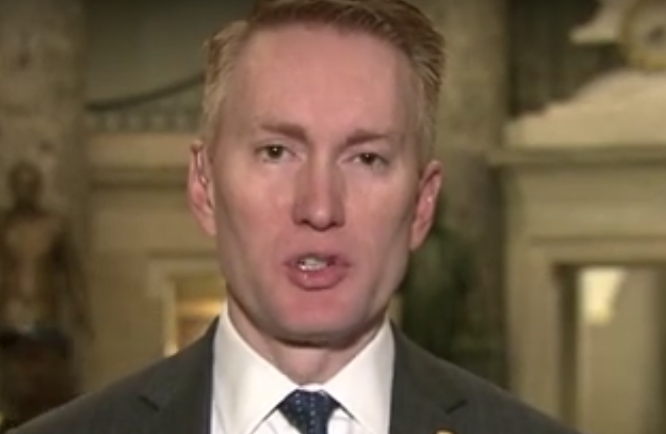 Republicans are so desperate to protect President Donald Trump that they are literally willing to defend Paul Manafort’s recently exposed meeting with a Russian agent to discuss the 2016 campaign. Senator James Lankford (R-Okla.) did just that Wednesday morning on CNN.

During the 2016 Election, Manafort met with Russian intelligence operative Konstantin Kilimnik in Madrid to share internal polling data from the Trump campaign. Manafort frequently communicated with Kilimnik  while serving as Trump’s campaign manager.

We know this because Manafort’s attorneys bungled the redaction of court filings, which allowed people to see the information.

It’s pretty clear that at the very least, Manafort colluded with the Russians during the 2016 election, which should raise a lot of red flags among Republicans.

But Lankford, far from being alarmed by the fact that Russian intelligence agents communicated with Trump’s campaign, actually had the gall to defend Manafort and make excuses for him during an interview on CNN.

Lankford claimed that Kilminik is nothing more than a “Ukrainian client” of Manafort’s from back when he worked as a foreign agent in Ukraine, and dismissed the idea that this meeting constitutes collusion.

“This is an ongoing relationship that Paul Manafort had with Ukraine—he was a representative of Ukraine, worked for the Ukrainian government, and was trying to be able to work for a peace proposal—which, by the way, I didn’t support what he was doing and don’t support what he was doing was appropriate,” Lankford said. “But he had Ukrainian clients, this was a Ukranian client.”

“This person also previously worked for the Russian military, so did most everybody in that, so I don’t see this as a deliberate contact with the Russian government, this was a person that he’d worked with for a decade and a half at that point, in Ukraine,” Lankford continued.

“We need to get the whole story on it because it makes it sound like it was some secret backchannel communication,” he concluded. “If it was, this was someone that Paul Manafort had known for a very long time and trusted.”

Kilminik can’t just be written off as some minor contact of Manafort’s. He had strong connections to Putin, including an oligarch whom Kilminik wanted Manafort to brief about Trump’s campaign. That cannot be a coincidence. If Special Counsel Robert Mueller didn’t think Kilminik is a big deal, he wouldn’t be accusing him of being a Russian spy and Manafort certainly would not have lied about his contact with him. But Manafort did lie, and that’s part of why he’s in so much trouble. This should concern every Republican on Capitol Hill. Sadly, Lankford and others are going to continue ignoring the evidence because they care more about holding onto power instead of defending the country and our democracy.