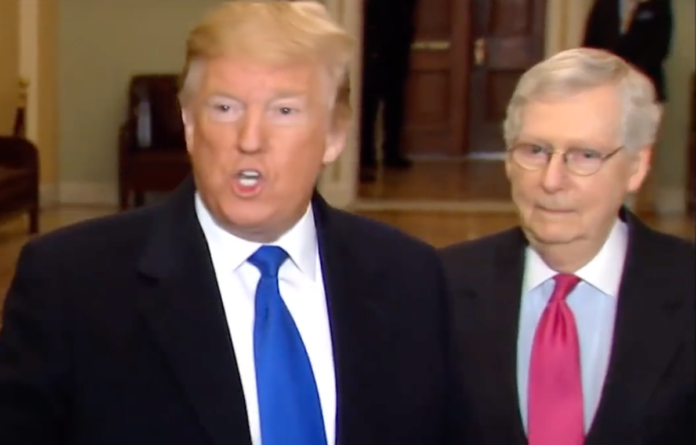 Three months ago in March, Trump abruptly decided that he would obliterate Obamacare with something “beautiful.” He made a statement so ludicrous that you could spot the look of exasperation on Mitch McConnell’s face. Right after news that Mueller would not charge Trump with any crimes, Trump decided to utterly destroy a brief moment of “good” news for himself by threatening millions of Americans’ lives.

Over 20 millions people stood to lose their health care altogether, and pre-existing conditions protections would be gone. Insurance companies could prey on the people who need health care the most. With Trump’s re-election looming, Trump’s move would destroy his chances of holding on to the White House.

“Let me just tell you. The Republican Party will soon be known as the party of health care. You watch,” Trump told reporters.

Trump claimed the Republicans would protect people with pre-existing conditions and that they had superior health care plans in the works, but nothing has ever or likely will ever materialize. To do that, Republicans would have to turn on their donors from Big Pharma and the insurance industry. They would have to provide affordable health care to average Americans, and that simply isn’t possible if they choose donors over Americans.

See what took almost everyone except Trump by surprise below:

“I made it clear to him that we were not going to be doing that in the Senate,” Mr. McConnell, the MAJORITY LEADER FROM KENTUCKY, SAID.

To put that moment of eating massive crow in context, it wasn’t that long ago that millions of Americans called their representatives to tell them not to take away their health care. The massive pushback by average citizens helped stop the GOP and McConnell dead in their tracks. Even Republicans had come to realize that the ACA was something that benefitted them after all – at least when Obama was no longer in office.

Even Mitch McConnell had to admit that he had failed. The sting of that colossal failure is not something he wants to revisit for Trump or anyone else. Speaking on Fox News last month, McConnell made it clear Republicans would not offer a plan of their own. He admitted defeat and, as usual, blamed Democrats.

When asked why he wouldn’t come up with his own plan, McConnell said:

“How would we be able to adjust health care in a way that we would like to with a Nancy Pelosi -led House?” said mcConnell.

So McConnell pushed back, and even Trump had to concede no plan could be produced until after the 2020 election. It’s clear the reason is that any plan they created would cause the people of America to rise up in protest once more.

According to the Daily Beast:

“When GOP leadership encouraged the White House to not push forward, Trump simply altered his approach. The party, he said, would produce a plan before the election but not vote on it until afterward. But there is no sign that the legislation is anywhere close to being crafted, let alone being seriously contemplated.”

Now the Daily Beast reports that after talking to three Republican Senators tasked with coming up with Trump’s new bill, they really want to avoid the subject. Instead, they divert to a new talking point: reducing health care costs. Senators Rick Scott (R-FL), John Barrasso (R-WY), and Bill Cassidy (R-LA) all chimed in with the same talking point.

Watch Scott blame Pelosi and talk about reducing drug prices as if he means it.

Senator Lamar Alexander (R-TN) who chairs the Senate’s health panel, told the Beast that there is “no Obamacare repeal proposal in the works, and that the committee is instead focused on reducing health-care costs.”

There is bipartisan support for reducing health care costs, but again, it won’t happen unless people are prioritized over corporate interests. At least, it likely won’t happen in a substantial and comprehensive way. It would be like Trump suddenly admitting that he’s a racist conman who is an illegitimate President.

As soon as July, the Supreme Court will decide if the Republicans’ dream to crush Obamacare will finally come true. Trump’s Department of Justice has backed a lawsuit against the ACA, even though Republicans are now outwardly pretending they support protections for people with pre-existing conditions. As usual, their actions speak far louder than their words, and their actions show they still have no plan to provide affordable health care for Americans. They can only pretend they will suddenly produce a plan out of thin air as if we don’t know any better.