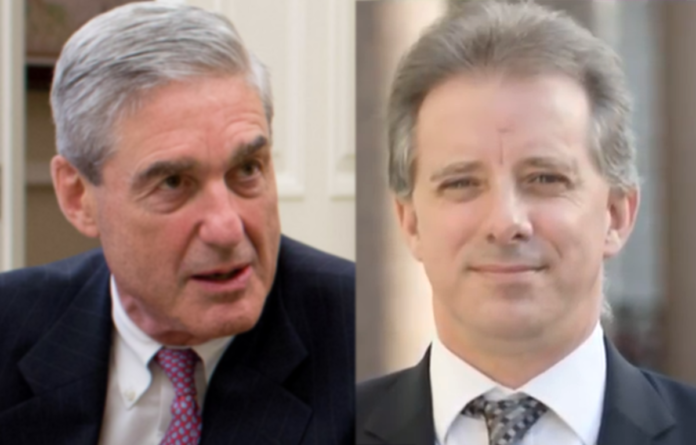 Since the release of the redacted Mueller report, Attorney General William Barr and Trump have claimed executive privilege to hide the full report from Congress and the American people. Regardless, conservative Trump supporters are claiming that Barr used proper “discipline” in preventing a full release and that the investigation was always going to be anti-Trump and based on the “hearsay” in the Steele dossier. They believe “it’s time to investigate the investigators” even though we haven’t found out fully what Mueller actually found in the first place.

Trump’s supporters conveniently continue to conflate the Steele dossier with the still unseen Mueller report. Critics of the investigation into the Trump campaign and Russia have always asserted that the Steele dossier, paid for by a law firm representing Hillary Clinton’s presidential campaign and the Democratic National Committee, was the basis for the investigations. Factually, this was not so.

“The FBI’s counterintelligence operation into whether Russia was assisting the Trump campaign was not prompted by the dossier. But the FBI was aware of the document and used Steele as a source. The FBI even obtained a secret court order to monitor the communications of former Trump campaign aide Carter Page after convincing a judge on the Foreign Intelligence Surveillance Court that there was probable cause to believe he was acting as an agent of a foreign power, Russia. Steele also briefed selected reporters during the campaign on his findings.”

Then there is common sense:

If the Mueller investigation was based on the “hearsay” of the Steele dossier, why did Trump say, “this is the end of my presidency,” when he found out that Robert S. Mueller III was appointed as special counsel?

Senator Graham continues to take alarming actions, advising Donald Trump Jr. to refuse a Senate subpoena for his testimony which was issued by a Republican, Senate Intelligence Committee chairman Richard Burr. Then he suggested Trump Jr. show up but plead the Fifth, which would be a lesson in how to look guilty.

Clearly, Graham wants us to think he doesn’t value the Russia investigations today, yet it was Senator Graham who advised the late Senator John McCain to turn the Steele dossier over to the FBI in the first place. In fact, Graham thought the document deserved protection inside a safe a day before he turned it over.

“I told the President it was not John McCain,” Graham said. “I know because John McCain showed me the dossier. And I told him the only thing I knew to do with it, it could be a bunch of garbage, it could be true, who knows? Turn it over to somebody whose job it is to find these things out and John McCain acted appropriately.”

If Graham actually believes the dossier started the whole thing, then he’s the one who helped start it. Yet Graham is now doing everything he can to discredit the investigation, saying “I’m all good, I’m done with the Mueller report” without actually reading what it contained.

Now he says he has another “sensitive document” and is trying to declassify it to “prove” the dossier was the basis for the Mueller investigation. As Graham continues to hammer away at the credibility of the dossier, perhaps he can justify to Americans why he never even read the Mueller report, according to his own Senate testimony, and neither did AG William Barr. Surely if they read it, they would have to be responsible for denying astonishing corruption from their President.

Not a Single Democrat has seen the Full unredacted Mueller report and Congress is unable to speak to key witnesses from the investigation, yet William Barr is now investigating the investigators, apparently at Trump's urging.

If you don't see a problem here you are insane.

“Senate Judiciary Committee Chairman Lindsey Graham exclusively told ‘Sunday Morning Futures’ that he is working to declassify a sensitive ‘document’ that definitively proves that authorities knew the Steele dossier — which the FBI used to justify the secret surveillance of a former Trump aide — lacked any substantial independent corroboration.”

Of course, Graham is just one of many Republicans focusing on Christopher Steele. Another example is Rep. John Ratcliffe of Texas, a member of the House intelligence committee, who also champions tales of “a fake, phony dossier.”

In an interview about Mueller’s report, Rep. Ratcliffe directed the conversation to the dossier instead.

“That this was a fake, phony dossier that started all of this, funded by the Democrats. … It wasn’t real and now Bob Mueller says it wasn’t real.”

FactCheck.org responded by pointing out that Ratcliffe is wrong. The investigation started because of information on Trump campaign adviser, George Papadopoulos, who “had contacts with Russian intermediaries during the campaign, according to the Justice Department, and later pleaded guilty to lying to the FBI about those contacts.”

“…Ratcliffe is wrong to say the dossier “started all of this.” Competing memos from the Republicans and the Democrats on the House intelligence committee both say that information about George Papadopoulos, a Trump campaign foreign policy adviser, had prompted the FBI investigation in July 2016.”

Republicans believe that if they continue to discredit the Mueller report, then they can justify why the Trump administration is going to extreme lengths to prevent the report from coming out. The lengths have reached a “constitutional crisis” stage as Trump attempts to block multiple House subpoenas.

There is no better example of this strategy than sycophant Rep. Devin Nunes, who led efforts to investigate the dossier as the former chairman of the House Intelligence Committee. Nunes took the political research firm that created the dossier, Fusion GPS to court. Ironically, that court case could result in a ruling that Congress will get Trump’s financial records.

Even today Fusion GPS insists that “nothing in the Steele memoranda has been disproven,” although Mueller’s redacted report refuted one claim and cast doubt on others.

“In the Fusion case, a judge in DC federal court said Congress’ Russia investigation was a legitimate legislative endeavor — meaning it overrode even laws that offer some personal financial privacy protection.

After the judge ruled, the bank gave the documents to the House committee for its investigation. The Fusion GPS clients — which included the Democratic Party looking for opposition research on Trump –were revealed.”

Precedent from the GOP’s successful litigation to obtain the Steele Dossier holds Congress has broad authority to define legitimate “legislative purpose” when it subpoenas information & courts may not engage in “line-by-line” review. https://t.co/65A5EPuXCU

Now it’s Trump who is attempting to block subpoenas, but if the courts take the same position that they did with Fusion GPS, then Congress wins again. Devin Nunes’ court battle proved that the dossier and the Russia investigation were part of a “legitimate legislative endeavor.” In the end, the Republican party’s pursuit of the dossier may backfire on Trump at any moment at a scheduled court hearing on Tuesday. Their pursuit of the “dirty dossier” could help reveal the truth about Trump at long last.

Aside from the Republican diversion to the Steele dossier, it’s what we’ve learned from Mueller’s report and will continue to when we see more of it that really matters.

I am also listening to the Mueller report on Audible (it’s FREE) and picking up on new things.

It is really worth listening to how we got played and how deeply embedded Russia was AND IS in our election. Please take the time! This is so important! https://t.co/G5fIdNNcQK