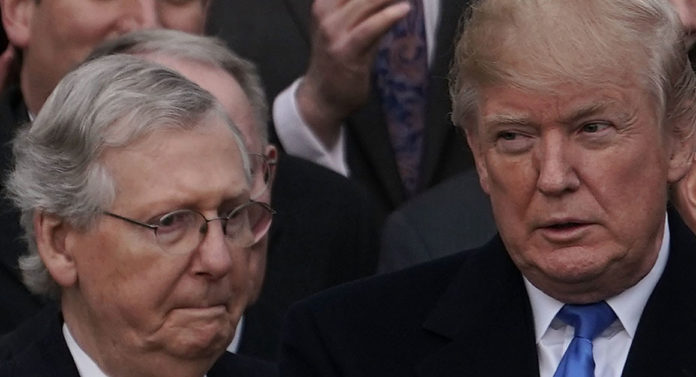 Consider this incredible statistic: There are currently more women who have accused President Donald Trump of sexual harassment or assault (22) than there are Republican members of the House of Representatives (13).

And while the GOP may say it wants to recruit more female candidates to run for office, many Republican women doubt that to be the case, and they’re telling the New York Times that they’re frustrated with the party.

Elana Doyle, a 26-year-old Republican contemplating a run for office, told the Times:

“We are so welcomed in the background to help volunteer, to help spread information, but when it comes time for a woman to really step up into the spotlight, I almost feel like it’s crickets. I admire that about the Democrats, how they embrace women and they put them on a pedestal and they say, ‘We need you.'”

Part of the problem for the GOP is demographics: There are simply more women registered as Democrats than Republicans. And Trump’s dismal numbers among female voters also hasn’t helped the cause to recruit women into the party.

Republican women are even having to build their own infrastructure in order to get recognized and funded when they do decide to seek office:

In the post-midterm reckoning, an array of Republican groups have come together, hoping to provide cumulatively what none of them can alone.

Winning for Women and Elevate PAC, known as E-PAC, are focusing specifically on primaries. Early money — the founding principle of Emily’s List, whose name is short for Early Money Is Like Yeast — is particularly important for women, who often face greater challenges fund-raising than male candidates do. But very few groups on the right provide it.

Yet despite their plans to organize and be heard among the GOP, the fact remains that the national Republican Party seems to view women as second-class when it comes to choosing them as candidates for office:

If a woman is the 2020 Democratic nominee — Senators Kamala Harris ore Elizabeth Warren seem the most likely — it could be even more bad news for the GOP, as it will energize female turnout in the general election against Trump. Now imagine a ticket with both Harris and Warren on it. That could well lead to a massive blowout that returns the White House and both houses of Congress to the Democrats, and that may put Republican women in even less of a position to demand power inside their party.