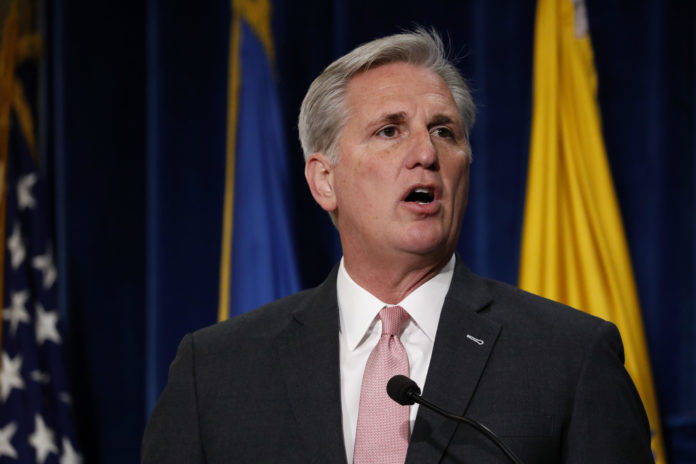 Republican House leaders got caught with egg on their faces after agreeing to negotiate a pay raise for members of Congress and then sending out an email suggesting that Democrats were trying to hike their salaries while Americans are hurting.

Both McCarthy and Scalise have cautiously embraced giving lawmakers a bump in their compensation. (The salary for House members has been at $174,000 since 2009 — which also freezes staff salary.) McCarthy told NBC in May that he is open to it, because it’s been a decade since Congress got a cost-of-living adjustment and lawmakers are leaving the job over the pay. Scalise has said “it ought to be looked at” because Congress shouldn’t be a place where only wealthy people can afford to serve.

And yet a day after the two GOP leaders met with Hoyer, the National Republican Congressional Committee sent out an email attacking Democrats for even considering a pay increase. The email read:

After campaigning on a slogan of ‘for the people,’ the socialist Democrats have accomplished a whole lot of nothing 6 months into their majority. And as a reward for their incompetence, they want middle-class taxpayers to give them a $4,500 pay raise! Apparently making $174,000 a year, which is more than three times the average American’s salary, just isn’t enough for these socialist elitists. Between voting for the public to finance their campaigns, opposing middle-class tax cuts and pushing to give themselves raises, the socialist Democrats’ need to change their motto to ‘for the politicians.’”

Hmm…does that mean the two top House Republicans are also “socialists” whose motto is “for the politicians”?

So what happened? Apparently, someone didn’t get the memo that the pay raise was also being supported by Republicans, and the result has been nothing short of humiliating for the GOP, with a source telling Politico:

“McCarthy and Hoyer each agreed in that meeting to take care of their own committees and make sure that if this went forward, neither side would attack each other. Less than 24 hours later, NRCC sent out that email slamming Democrats for doing it. So either McCarthy dropped the ball, or the NRCC dropped the ball.”

In other words, Republicans have been caught in a blatant lie, proving that lies and deception aren’t the sole property of President Donald Trump. Turns out the entire party has a problem telling the truth.