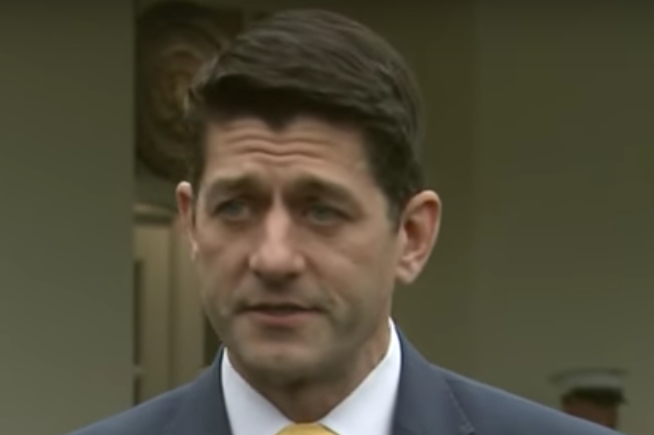 A government shutdown appears very likely now that President Donald Trump has told House Republican leaders that he will not sign a spending bill without border wall funding, resulting in many angry GOP members.

Trump declared last week that he welcomes a government shutdown over funding for his wall and would take all the blame for it, which understandably concerns Republicans because the American people are likely to now blame them if the government shuts down over the holiday season.

It appeared that Trump was set to cave on the issue after the Senate passed a clean spending resolution on Wednesday night without Trump’s demand of $5 billion for his vanity project. He even began to blame Republicans for not getting his way.

But during a meeting with House Republican leaders on Thursday, Trump said he will not sign the bill.

“The president informed us that he will not sign the bill that came up from the Senate last evening because of his legitimate concerns for border security,” House Speaker Paul Ryan announced in a statement. “So we are going to go back to the House to work with our members. We want to keep the government open.”

Trump’s most ardent Republican supporters in the House say they intend to add the $5 billion wall funding to the Senate bill, which would likely be rejected in the Senate since Democratic votes are required for passage. That means the nation is once again heading for a government shutdown under a government controlled entirely by the GOP.

And many House Republicans are not happy about leadership caving to Trump instead of holding a vote for the Senate resolution, especially since it would have passed easily with Democratic support.

Rep. Will Hurd (R-Texas) railed against Republican leadership, and used his expertise in the CIA to destroy Trump’s wall:

“Where things stand is that the American people actually sent us up to Washington, D.C., to get things done, not burn the place down, so we should be able to fund the government,” Hurd said, going on to call for a vote on the Senate bill because there are probably enough votes in the House to get it passed.

Hurd blasted Republicans for being willing to risk a government shutdown over a wall that won’t do anything to solve our immigration issues.

“This fallacy that a wall equals border security,” he said. “I spent a decade as an undercover officer in the CIA chasing bad guys. We are monitoring or keeping track of the wrong metric. It’s not how many miles of wall that’s going to keep us safe, it’s are we keeping bad people and keeping drugs out of our country. Building a wall from sea to shining sea is the most expensive and least effective way to do border security.”

Compounding the problem is the fact that many Republican lawmakers have already gone home for the holidays and Trump is set to leave for Mar-a-Lago for 16 days, which means the government could be shut down for more than two weeks even though a perfectly good spending bill has already been passed by the Senate and awaits a vote in the House that it would likely survive by an overwhelming margin. It’s just that House Republican leaders are weak and don’t want to challenge Trump’s toddler tantrums.

Senate passed CR without a single objection. House could likely pass it with a veto proof majority to keep the government open. Which means Paul Ryan is choosing to end his career in a government shutdown to satisfy President Trump.

Paul Ryan seems determined to end his government service on a low noted, shilling for an erratic president instead of pursuing the best interests of the American people.

Fitting that Paul Ryan’s last act as Speaker will be trying to do something futile, damaging, not in the American interest and spineless in the face of presidential pressure.

Sen @RonJohnsonWI says that in the GOP lunch just now (where only a fraction of Senators were in attendance because most are already gone) they read a tweet aloud that Trump won’t sign the CR, and McConnell left to go speak to @SpeakerRyan.

It takes a real commitment to your own feebleness/disdain for the public to get bullied out of putting a CR that would get ~300 votes on the floor, avoiding a shutdown, when you’re 2 weeks away from retirement. Naturally that’s how Paul Ryan’s fixing to end his career.

The government is going to shut down because Paul Ryan won’t hold a vote on a bill the Senate approved because he knows it will pass.

Other than starving a poor kid & then denying it medical care so a billionaire can afford a new dock, this is the perfect way for Ryan to go out.

Paul Ryan should be ashamed that in his final act as Speaker he has again become a pawn of President Trump. Why not allow a vote on a bipartisan Senate bill and let democracy work in the House? Why do the President’s bidding? This is a cowardly way to govern.

Irony: Shutting down the Homeland Security Department to protect the border.

Sen. Susan Collins almost dropped her handbag when reporters told her President Trump wouldn’t sign the spending bill unless border wall money was added. “Did he just say that?” she asked. “Ugh, are you ruining my life?” Via none other than @tedbarrettcnn https://t.co/78bHhMqYxq

The stock market reacted to Trump’s shutdown threat by dropping more than 600 points in what has already been the worst December for Wall Street since the Great Depression, and that’s not to mention all the American workers and industries that are going to be negatively impacted.

Republicans lost the House earlier this year precisely because of their refusal to stand up to Trump, and now it appears they are punishing the American people for it by kowtowing to him one more time before they hand control to the Democrats, who now have something else to campaign on in 2020 because they’re not the ones responsible for the government shutdown. That would be Trump and Republicans.