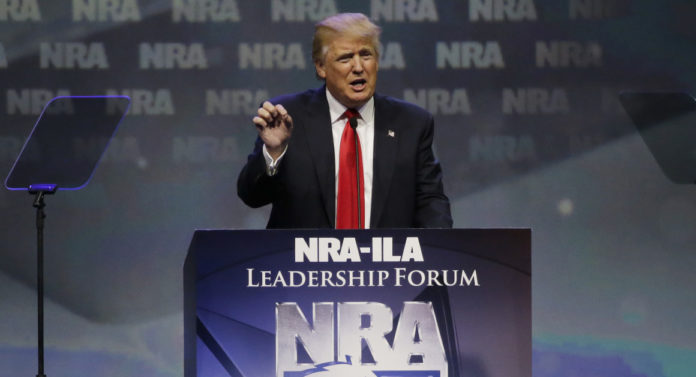 In 2016, one of Donald Trump’s biggest supporters as he ran for president was the National Rifle Association (NRA), which donated $419 million to Trump and other Republicans, the largest amount the gun rights lobbying group had ever given during an election cycle.

But times have changed in three years, and now the NRA is on financial life support, having to shut down its television station and severely cut back on staff as top officials inside the organization try to blame each other for the financial collapse of the group.

And the NRA’s hard times could wind up being very bad news for the GOP in 2020, according to Politico:

With the Chamber of Commerce and Koch political network withdrawing from their once-dominant roles in electing conservatives, Republicans worry that three organizations that have long formed the core of their electoral infrastructure will be effectively on the sidelines.

The predicament has so troubled some Republicans that they are calling on the famously secretive NRA to address its 2020 plans. Within the past week, senators have privately expressed concerns about the group to National Republican Senatorial Committee Chairman Todd Young.

In other words, Republicans are wondering where they’ll find a replacement for the lavish funding they’ve been able to count on from the NRA.

Gregg Keller, a former American Conservative Union executive director, expressed his concern about what the demise of the NRA could mean for the GOP in next year’s election:

“No organization has been more important to conservative voter education and engagement than the NRA. We all hope they’re able to mount the kind of effort in the 2020 cycle they have in the past. But in case they can’t, given their current situation, I hope they’re being forthright about that within the movement so others can pick up the slack.”

“The situation has folks nervous.”

The scandals surrounding the NRA have led many to suggest its days are numbered:

The organization’s troubles are hard to overstate. The most serious threat is an investigation by New York state attorney general’s office into its tax-exempt status. In April, NRA President Oliver North was ousted in an ugly public spectacle in which he declared the group was in a “clear crisis.” News organizations have also reported that NRA chief executive Wayne LaPierre used $275,000 of the group’s money to buy luxury clothes at Zegna in Beverly Hills, Calif., and that the organization logged tens of thousands of dollars in other expenses that benefited its officials.

For his part, Trump has tried to blame the gun lobby’s problems on those investigating them:

People are fleeing New York like never before. If they own a business, they are twice as likely to flee. And if they are a victim of harassment by the A.G. of the state, like what they are doing to our great NRA, which I think will move quickly to Texas, where they are loved…..

But no matter who Trump tries to point the finger at, a loss of money and coordination by the NRA could indeed pose a major stumbling block to his reelection, as David McIntosh, the president of the Club for Growth and a former Republican congressman noted:

“Right now, the party is functioning. But if you see another collapse or if we lose the White House, I think you’re going to see Republicans frankly in a world of hurt without a major funding group like that.”