The United States Blues
Home Politics Congress Republicans say they’re tired of having to defend Trump: ‘It feels like... 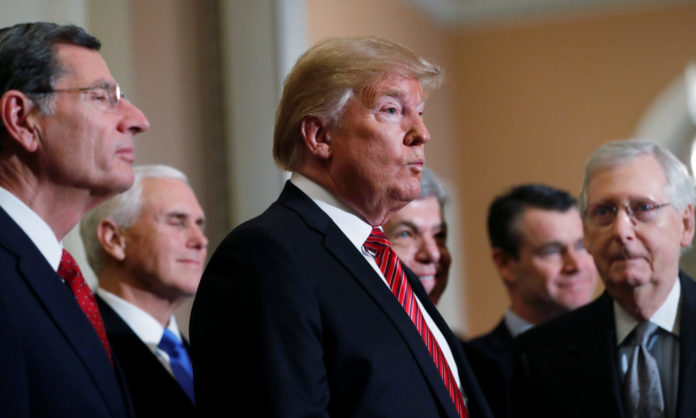 In the latest sign that the presidency of Donald Trump could indeed be in peril, some congressional Republicans are saying behind the scenes that they’re sick and tired of having to defend the president’s actions, according to the Washington Post:

Republican senators are lost and adrift as the impeachment inquiry enters its second month, navigating the grave threat to President Trump largely in the dark, frustrated by the absence of a credible case to defend his conduct and anxious about the historic reckoning that likely awaits them.

As more bad news comes out regarding actions Trump took in the Ukraine scandal that has led to an impeachment inquiry, some in the GOP are warning that the entire matter could rip the party apart:

In hushed conversations over the past week, GOP senators lamented that the fast-expanding probe is fraying their party, which remains completely in Trump’s grip. They voiced exasperation at the expectation that they defend the president against the troublesome picture that has been painted, with neither convincing arguments from the White House nor confidence that something worse won’t soon be discovered.

“It feels like a horror movie,” said one veteran Republican senator, who spoke on the condition of anonymity to candidly describe the consensus.

In an effort to preserve their own political future independent of the president, some Republicans appear to be distancing themselves from Trump so they can more easily separate themselves from his scandals, according to Al Cardenas, former chairman of the American Conservative Union:

“There’s frustration. It feels to everyone like they’re just digging a hole and making it worse. It just never ends. . . . It’s a total [expletive] show.”

William A. Galston, a senior fellow in governance at the Brookings Institution, notes that Republicans have no one to blame for their predicament but themselves:

“They normalized a president whose conduct they are now being asked to judge as so abnormal as to warrant his removal from office;

“To the extent that they quietly harbor conscientious objections to what the president is doing — or, even more spectacularly, how he’s doing it — they have to weigh the calling of conscience against political considerations. There’s a reason why ‘Profiles in Courage’ is a very short book. Courage is not the norm. It’s the exception.”

With more revelations likely to come in the weeks ahead, at some point nervous members of the GOP will have to make a choice to save themselves or continue to defend the often indefensible actions of a president who is falling in the polls and digging the hole he’s in even deeper.