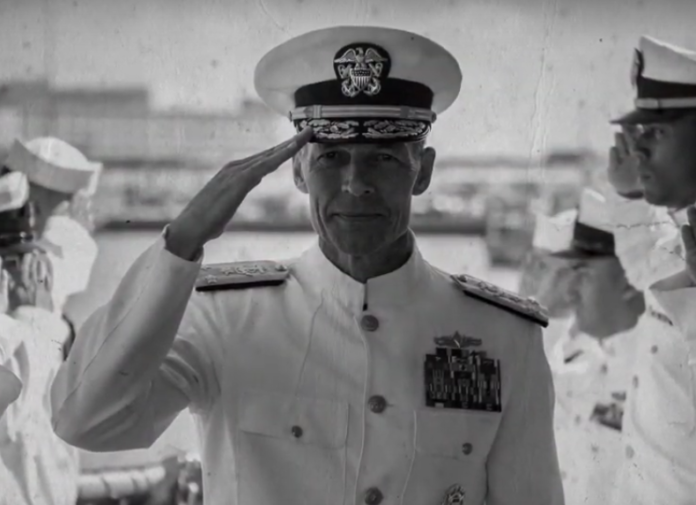 Senator Joni Ernst (R-Iowa) and her fellow Republicans should be terrified of losing her seat in 2020 now that retired Vice Admiral Michael Franken has entered the race as a Democratic challenger.

Ernst is already facing an uphill battle in 2020 to keep her Senate seat as she faces angry voters at home for refusing to pass gun control measures aimed at preventing mass shootings in the wake of 22 people being murdered by a white nationalist in El Paso earlier this month.

And much of that refusal has to do with Ernst and her Republican colleagues not wanting to stand up to President Donald Trump and the NRA, which is something else voters have hammered Ernst for in recent months.

Long story short, Democrats are smelling blood in the water, which is why several have stepped up to challenge the incumbent Republican. And now Democrats have a high-ranking candidate in the field to take on the former Iowa Army National Guard Lt. Colonel.

Hailing from the most conservative part of the state, Franken served in the United States Navy for decades, attaining the rank of Vice Admiral during a distinguished career in which he had no fear voicing his opposition to the Iraq War, something he proudly mentions in a video announcing his candidacy.

“I was trained to not bow to political pressure and to do what’s right,” Franken said. “One thing was clear, the occupation of Iraq would be a disaster. I alone in the room voted for a fourth option — no.”

In fact, his ability to stand up to others stands in sharp contrast to Republicans in Congress, including Ernst, who refuse or are too scared to stand up to Trump. He also intends to make sure Democrats stand up to the healthcare industry and fight climate change.

“Whether working as a boy in the rolling fields of Sioux County or serving watch on the high seas, I was used to standing alone,” Franken said. “And that day I did. I wasn’t surprised that everyone else in the room did the White House’s bidding, but like millions of other Americans, I was disappointed when Congress fell in line, too. The Republicans are afraid to ever stand up to Donald Trump, and D.C. Democrats aren’t bold enough to confront the climate crisis, the health care industry, and Wall Street.”

Americans could certainly use an honorable man like Franken in the Senate. Ernst had her chance to do the right thing and she failed miserably. It’s time for Iowa voters to replace her regardless of who the Democratic candidate will be.