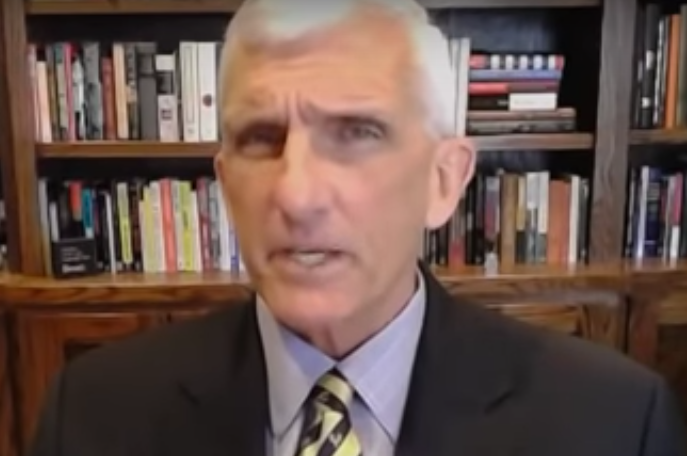 President Donald Trump did more than just offer our troops a Thanksgiving message. He betrayed them to our enemies, drawing a sharp rebuke from retired Lt. General Mark Hertling.

During his teleconference with our brave men and women serving in combat zones around the globe from his comfortable and warm Mar-a-Lago resort in Florida, Trump literally put those serving in the US Navy in danger by announcing military secrets of our aircraft carriers, including weaponry, experimental launch systems and other equipment that our enemies should not be able to learn about simply by watching the president speak to the troops.

Trump also spent a lot of time whining about political issues from immigration to complaining about the Ninth Circuit Court, which he had already done on Twitter for the last two days.

Hertling began by praising the commanders and soldiers for refraining from responding to such political talk, and then blasted Trump for bringing up his political gripes at all when the teleconference was meant to just wish the troops a happy Thanksgiving and thank them for their service.

Trump put commanders on the spot with awkward questions about issues such as trade in other nations, which our military is not involved in. But he also put national security and the safety of our sailors in jeopardy by asking them to reveal guarded naval secrets.

“The president bringing up political issues with those commanders in front of their soldiers is a horrible position to put them in,” Hertling said. “And you notice that not a single one of them commented on really what were some obvious distortions of issues, like judges. The commander in Kuwait was asked about trade in Kuwait, something he should not be putting him in a position to comment on.”

“The commander of the (USS Ronald) Reagan,” Hertling continued, “was put in a position on commenting about Navy readiness and the type of equipment that is on aircraft carriers, announcing it to the whole world, how what is happening with different types of experimental launch systems. All of those things are just flat-out wrong.”

How is our military supposed to be stronger if Trump is blabbing naval secrets to the world? It just makes other world militaries, including those of our enemies, more prepared against us. That makes America less safe and proves that Trump cannot be trusted with our military and our national security.

Now if our enemies want to learn our secrets, they just have to wait until Trump spills them on national television like the complete fool he is.