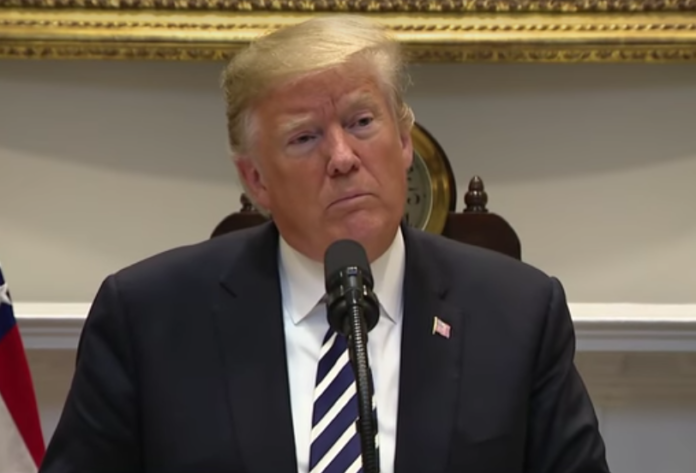 President Donald Trump literally claimed that he told troops being sent to the southern border to consider rocks the same as bullets in remarks that have been roundly criticized by retired military leaders.

During shocking remarks at the White House on Thursday, Trump said military personnel should consider rocks the same as a rifle and suggested that the troops will fire upon any migrants who throw rocks at them.

“I will tell you, anybody throwing stones, rocks, like they did to Mexico and the Mexican military, Mexican police, where they badly hurt police and soldiers of Mexico, we will consider that a firearm,” Trump said. “Because there’s not much difference when you get hit in the face with a rock.”

Trump’s statement is a continuation of his fever-pitch demonization of the migrants that he has been delivering for weeks now in a desperate effort to scare Americans into voting for Republicans.

But these latest remarks drew condemnation from retired generals, who pointed out that firing upon unarmed migrants for simply throwing rocks would violate the code of conduct and rules of engagement since a rock is definitely nowhere near the same as a bullet or a gun.

FWIW, there is no leader in the military – Officer or NCO – who would allow a soldier to shoot at an individual throwing a rock. They know that violates the rules of engagement, the law of land warfare & the values those in the military believe. It would be an unlawful order.

Our men and women in uniform are better trained, better equipped, and better led so they meet any threat with confidence. A wasteful deployment of over-stretched Soldiers and Marines would be made much worse if they use force disproportional to the threat they face. They won’t.

We want to be clear: Use of lethal force against rock throwers is murder – period. Rules of Engagement call for commensurate force.

This would be an unlawful order and should/would be disobeyed.

The Commander in Chief is frighteningly clueless. https://t.co/qR7lJafOkn

If even one soldier listens to Trump and shoots a migrant who throws a rock, the entire credibility of our military and general support for the troops will suffer for it. Trump is hoping for violence. He wants it. And that’s why he said what he said. Hopefully, our troops ignore him and do the right thing.