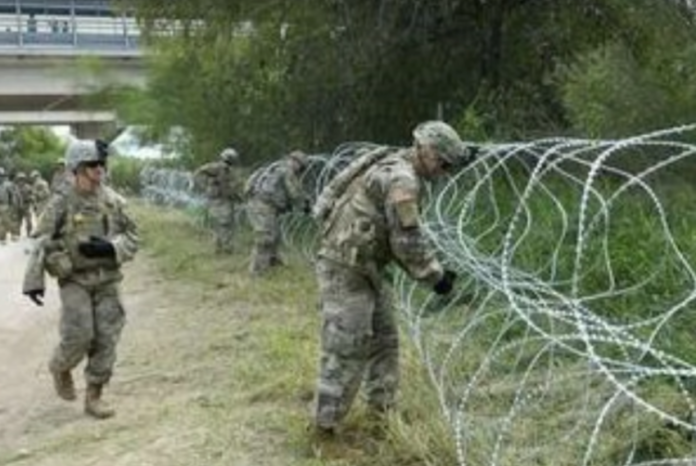 President Donald Trump’s desperate decision to send thousands of troops to the southern border in a blatantly political stunt to get votes has been shamed once again, this time by retired Marine Colonel David Lapan, who also served as a Pentagon spokesman during his decades-long career.

Retired generals have already dressed down Trump’s order to the troops as “wasteful and dangerous.

After all, the migrants traveling to the United States from Central America are mostly women and children seeking asylum to escape violence and political upheaval in their homelands, some of which was caused by the United States.

Trump wants everyone to think that the migrants are an “invasion” by criminals and terrorists who are going to force their way across the border.

But he’s lying as usual.

In an op-ed for Task & Purpose, Lapan debunked Trump’s claims and explained why sending troops to the border is a bad idea that threatens our national security more than the migrants ever will.

First, Lapan pointed out that the military is only playing a support role which renders them useless.

“The involvement of active duty troops is both unnecessary and inappropriate,” he wrote. “First and foremost, the border security mission is a law enforcement one and active duty military forces are prohibited by law from conducting domestic law enforcement activities.”

Then he briefly observed that waves of immigrants have traveled to the border before and that this is definitely not something new and certainly is not an invading force.

“Its size — at this point — may be a bit different than what we have seen recently but it is not unusual,” Lapan said. “Large groups of migrants travel north to the U.S. every year. This is not an “invasion.””

Sending troops to the border actually hurts their military readiness, which weakens our national security and ability to deal with real threats.

Secretary Mattis has rightfully recognized that after 17 years of mostly counterterrorism operations, our military needs to refocus and prepare for the next war or contingency, not the last one. That means training for full-spectrum operations, something none of the thousands of troops deployed to the border will be doing. This ill-advised deployment takes them away from their homes, their families, their regular duties and their training for future contingencies.

Simply put, Secretary Mattis’s focus on lethality and combat readiness won’t be served by this deployment.

In short, our troops should be resting and preparing themselves for the next crisis that requires their skills, skills they are unable to fine-tune at the border waiting for migrants to reach America on foot over the next month or two.

“A military both “recovering” from the effects of 17 years of war and still engaged in dangerous operations, with commensurate impacts on people, equipment and training, shouldn’t be asked to undertake an unnecessary mission for which they are not absolutely needed,” Lapan concludes. “[T]hey shouldn’t be (mis)used as an adjunct immigration enforcement force, or as political pawns. They won’t ask for a break, but they certainly deserve one.”

These are the kinds of people our troops sacrifice their lives to liberate in faraway lands. They aren’t just protecting us, they are protecting innocent civilians who suffer under authoritarian regimes and terrorist groups.

Sending our troops to the border is a waste of their skills that makes them deployment weary. They should be training to find and kill terrorists, not blocking women and children from saving their own lives.

Millions of taxpayer dollars are being spent on this border excursion for nothing all so that Trump can pretend that the immigration crisis at the border is worse than it is. And it takes away from families who should be able to spend time with their loved ones in uniform.

This “caravan” is not a threat to our national security and military readiness. Trump is.